John Ellis machines are not available right now. They are custom made for you when you order them, and right now the lead time for production is uncertain (after the coronavirus pandemic has run its course). 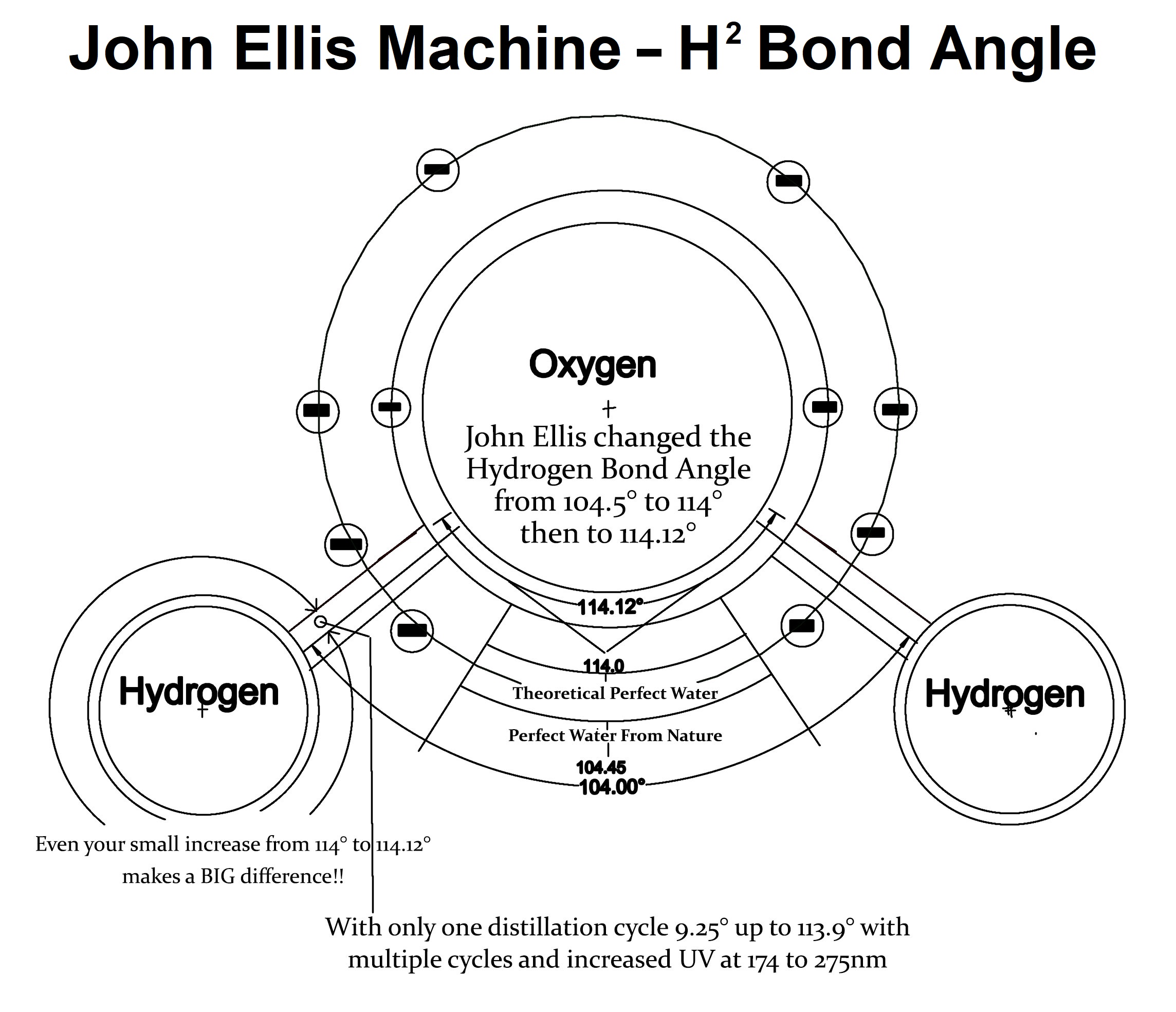 John Ellis water has been studied though, and in and of its own right, it has been shown it to be healing water too. For instance one can pour this water (either the distilled or the runoff John Ellis water) into a soured well and rejuvenate it. This has also worked for pools, spas, septic tanks, and local pond water or lagoon issues.

The Dole company is one of several manufacturers who have used John Ellis water and found it to be very effective in killing off mold spores. John Ellis water has anti-fungal, anti-bacterial and even anti-radiation functions in the body, food, and in the environment. Side note: Dole even offered (unsuccessfuly) to buy out John Ellis's patent many years ago.

People who mix John Ellis water in with their drinking water have claimed to be healed of a variety of conditions, including cancer.  John Ellis, himself, developed his machine in order to create healing water for himself, and he in fact cured himself of several tumors on his head and neck.

An interesting and fortunate thing about John Ellis water is that it has a cascading effect when mixed with other water. A small amount of John Ellis water (distilled or run-off water), added to any other water, has been shown to transform that water to have the new 114-degree hydrogen bond angle. [Note: John says you must stir it and give it some time (minutes, hours or days. depending on batch size) to make the transformation. The proportion recommended to do this is about 30 drops of John Ellis water to an 8-ounce glass of other water or 2 ounces per gallon.]

The John Ellis E5 and all of the John Ellis Living Water Machines have a patented process of boiling/cooliing the water in the special side chamber 3 times per minute. This rapid heating/cooling of water is based on theoretical principles (which John Ellis studied in his engineering training) which had never before been put to practical application. It is quite a unique invention, and no other machine has ever been built to actually achieve the "perfect hydrogen bond angle" in water that others had only theorized. 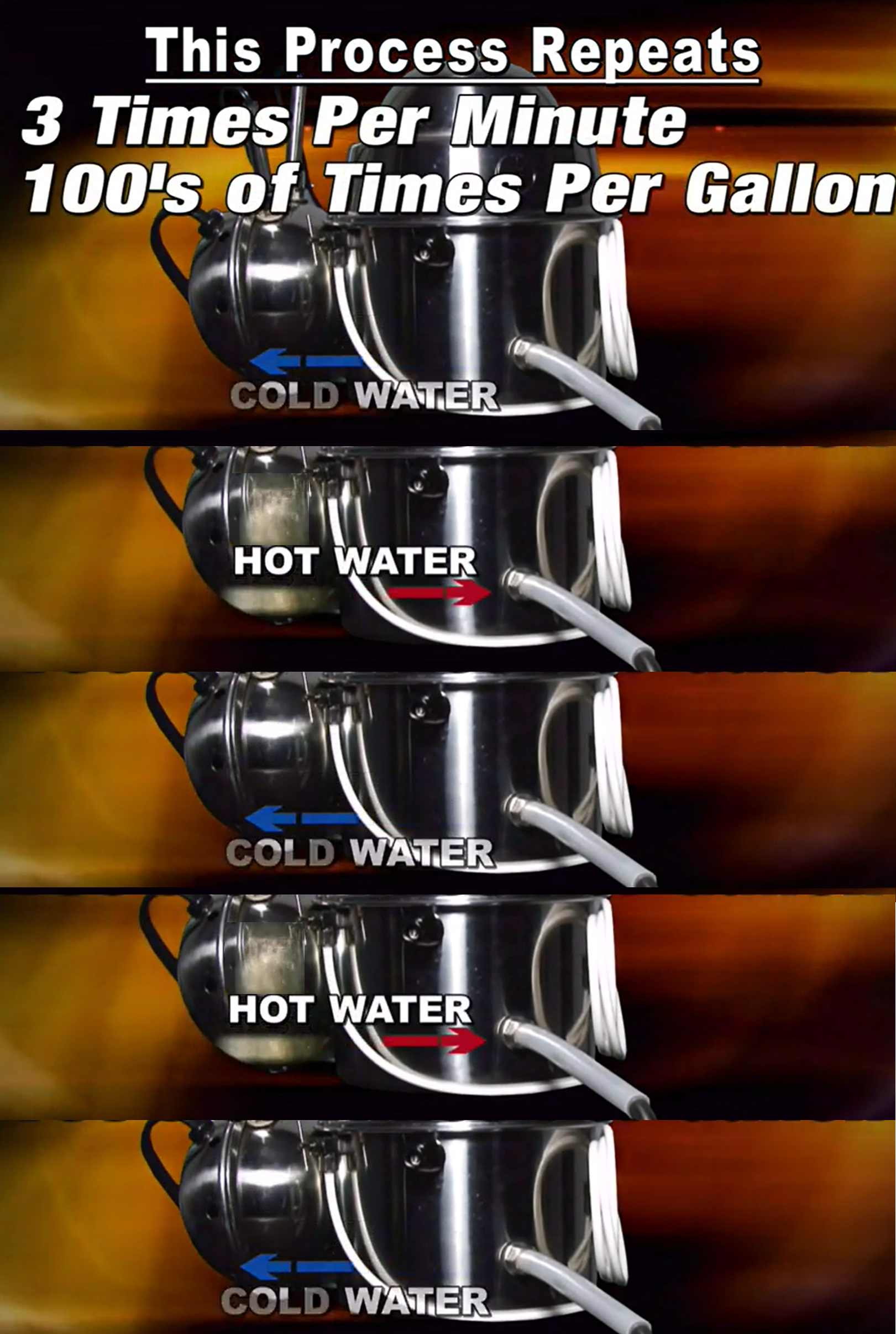 What Does it mean "No returns. Sales are Final"?

How to Use John Ellis Water

You can add John Ellis water (either distilled water or John Ellis runoff water) to any filtered water to change the bond angle of the filtered water and restructure it. The instructions are to add about 6-12 ounces of John Ellis water to a five-gallon jug or water dispenser filled with filtered water. Shake by twirling the container around and around in one direction to create a vortex action for about a minute. Let this sit, and wait for at least several minutes or hours (or better yet, a day) so the John Ellis water has a chance to contact (and change) the rest of the water in the container. Make a new batch before you run out, so you don't have to wait next time.

Another possibility of what to do with John Ellis water is to mix it with filtered water (as above) and then process that mixed water with a hydrogen machine (such as the High Rich machine or the HS72 Lourdes Machine) for the extra added benefit of free hydrogen in the water. When you do this you add free hydrogen antioxidants to the restructured water, which I’m guessing will improve the health benefits of the water greater than the sum of its parts.

So, to compensate for the bond-angle difference, what I do is: I  add a small amount of John Ellis water to my ionized water, especially if I am putting in vacuum-stainless bottles to drink later. The only way to store ionized water without losing the valuable hydrogen antioxidants is to use a special kind of vacuum stainless bottles. A few hours of waiting will be plenty of time for the wider-bond-angle water to spread to the other water and change it to have the new bond angle too.

For variety, I also put John Ellis distilled water into my hydrogen water machine, and create hydrogen-water with it. It's quite a refreshing drink. I do this just for variety, and do not advise to do this exclusively, because at least in my case it would tend to off-balance the pH of the body (too acidic).

When to Buy a John Ellis Living Water Machine vs. Just Buy the John Ellis Water?

If you drink a lot of water and are handy with equipment, then you might benefit from purchasing the John Ellis E5 machine. However, John Ellis water can be purchased by itself (without a machine), if you don’t want the hassle of making it yourself.

At Alkaline Water Plus we filter the water with UltraWater filtration prior to distilling it in the John Ellis machine. The added advantage is that the UltraWater filters remove all pharmaceuticals, fluoride and other tricky things that even water distillation does not remove. This makes the highest quality of any other John Ellis water you can buy, anywhere.

How to set up and operate a John Ellis Machine:

The John Ellis machine is a seriously dangerous machine to operate around children, anyone with diminished intelligence; or anyone who is not good with equipment. You can burn yourself if you don’t use proper caution, also destroy the machine with improper use, and I imagine even burn down the house. Directions come with the machine, but here are some broad directions to give you an idea of it. 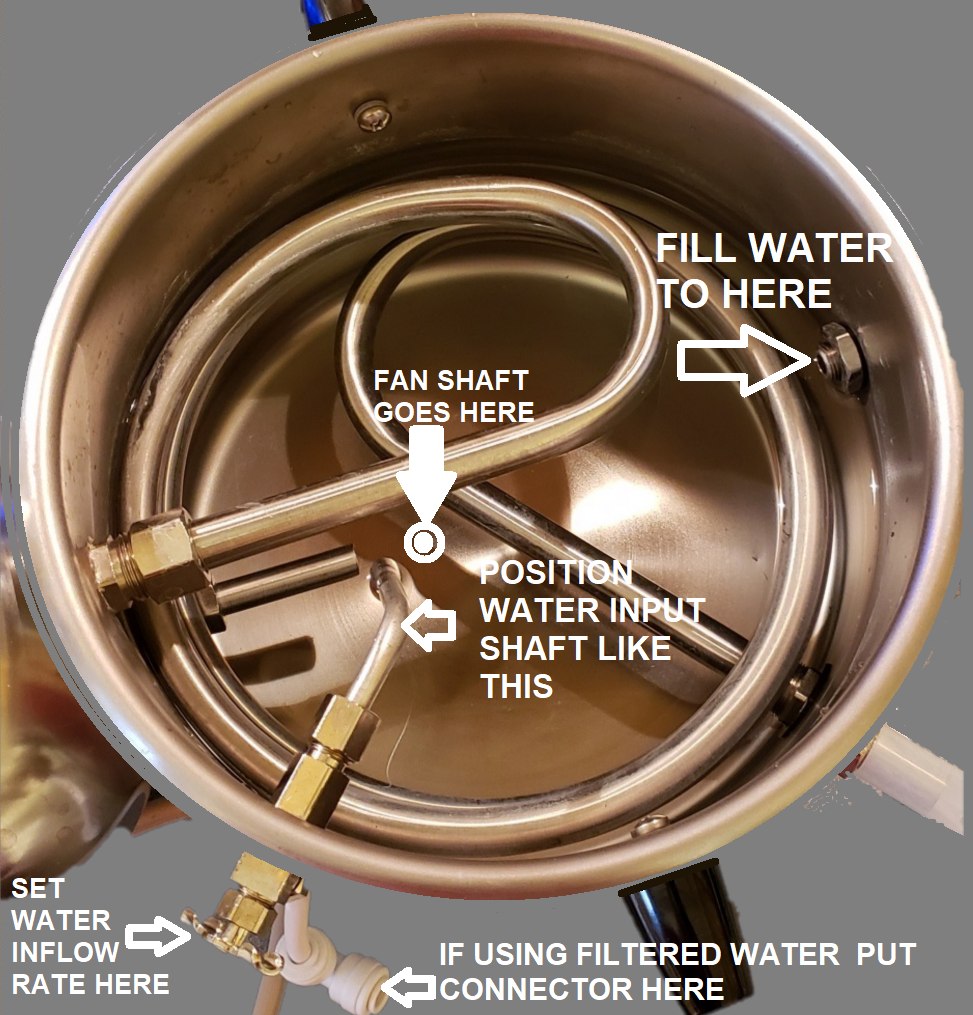 Many of the claims and testimonials I've read about John Ellis Water are very similar to what people and scientists have found about ionized water. It's very interesting to see the similarities about these claims as well as scientific testing, even though the two types of water are so very different. That's one reason why I suspect that the bond angle of ionized water is also changed (only a suspicion at this point though]. To prove such a thing as a hydrogen bond angle change, one would have to use a scanning/tunneling electron microscope of the highest caliber (which only a few exist in the world, and none are for public use).

BioEnergy testing is another way to measure the energy potential of a water sample. The BioEnergy testing I've seen done on ionized water and John Ellis Water shows both (on their own) to have extreme levels of energy-potential, but combined, the potential is exponential. In other words, when a small amount of John Ellis water (about 30 drops per cup) is added to the ionized water, the tests I've seen have more than double the energy potential (greater than the sum of its parts).

Live blood testing is another type of test one can do after the fact of drinking ionized water or John Ellis water. Live blood cell analysis demonstrates that both waters have a very positive effect on the healthy shape and movement of blood cells in live subjects. In other words, drinking both John Ellis Water and ionized water improve the blood flow and the shape and other characteristics of red blood cells.

Both the acidic byproduct water of a water ionizer and the distilled John Ellis water have been tested and shown to kill viruses, mold and bacteria (virtually all microorganisms), and both waters are very good for growing plants.

Washington Post Article: Here's how John Ellis water started getting famous: Back around 1992 Edward Cody of the Washington Post wrote an article about John Ellis water and the impact it was having on a small town in Mexico. A wealthy farm owner in Mexico bought a John Ellis Living Water Machine. He used the water to drink and also to treat the farm's well. One day people noticed that a farm dog that was dying got better immediately after lapping up some of the spilled well-water. The news of this spread around the tiny town, and soon people were coming to the well to get the water. These people were actually getting better, from various ailments.  As time went on, the wealthy farmer brought more machines to pour more and more water into the well and then freely shared all this water out of the well with anyone who came to get it. Finally a Washington Post reporter heard about it and he went down there to Mexico and then wrote an article about it. According to the article, ten thousand people a day were going there for the water, each and every day (conservative estimate). They were standing in long lines, over a mile long. They were swearing by the water and calling it a miracle. It was helping people with all kinds of ailments, from aides to diabetes. Here's a link to the full article.

The Washington Post article inspired scientists, like  Guy Abraham, to study the water to try to discover what was so different about this water and why it has such healing qualities. Other scientists, such as the nuclear engineers at Los Alamos Nuclear Lab, have studied and used the water (successfully) as well, and validated the fact that the water does have a wider hydrogen bond angle than normal water.

Contaminated Long Island Aquifer: Other nuclear labs and environmental scientists have successfully used John Ellis machines over the years to clean up contamination and even nuclear wastes. One such facility was the Long Island New York Brookhaven National Lab. In the 80's they had a nuclear reactor which accidentally made all the water in the aquifer under Long Island radioactive. They had the highest cancer rate in that area for a while. They bought hundreds of the John Ellis machines and after successfully recycling the water from the aquifer they called John Ellis to tell him his machine was the only one that was able to get rid of the radiation.

How to Treat a Swimming Pool, Well or Septic Tank With John Ellis Water

Mix about 10 gallons of John Ellis distilled water into the pool, or throw into the well. For the septic tank, you only need to pour John Ellis Water down your toilet (or better yet, add it to your bath water for a spa-bath). There are many reports of people doing this successfully to treat their wells, pools, spas and even to spray on fields and crops. The normal amount would be 1 gallon for every 100 gallons of water you are trying to treat.

When you buy a John Ellis Living Water Machine you will receive certification that your purchase went to the tax deductible, non-profit, John Ellis corporation, which John Ellis says you can claim at tax time.