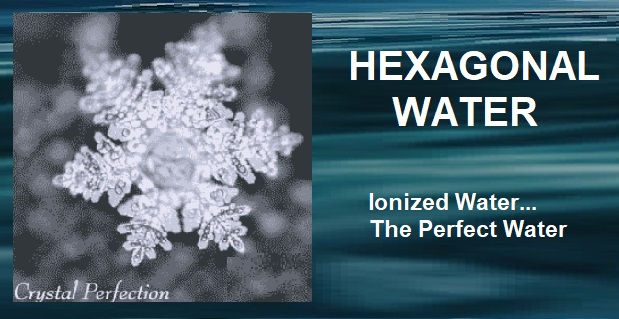 Hexagonal water is a term that refers to water in its most simple, natural, hexagonal shape. A research scientist (Dr. Emoto), back in the late 90's and early 00's, discovered that city tap water, when frozen, made no crystal shape. Instead it froze in ugly, random ways. He used the technique of flash-freezing and super-magnified photography to take pictures of droplets of this water as they were freezing. He learned through research that only hexagonal-shaped water would freeze into beautiful crystals, and ordinary tap water was not hexagonal water, because it made some of the most ugly crystals.

When Dr. Emoto used water from a pristine, natural, untouched spring, it made a beautiful crystalline shape when it was frozen. He called this water hexagonal-water and concluded that this water was so beautiful, because it was the way God intended water to be.

Dr. Emoto found that when water was in any way unnatural or polluted, it didn't form a pretty crystal when frozen. This ability of some water to form hexagonal shaped crystals when frozen is a unique way of classifying water. The term "hexagonal-water" was created for this purpose.

Dr. Emoto did further studies on hexagonal water and found that several types of water, that people were claiming to be healthy and healing for their bodies, fit into the category of hexagonal water when they sent him samples for testing.

Jay Hare (from AlkaViva) sent Dr. Emoto one of his Jupiter water ionizers to test. Dr. Emoto found that ionized water (from a water ionizer) made some of the most beautiful crystals when it was frozen. Not only did he find that ionized water has a perfect hexagonal shape, he also photographed the process of the crystal growing and forming the most beautiful crystals. He sent these pictures to Jay, and you can see one of them, below.

People all over the world, who were being healed with ionized water, did not need this extra validation by Dr. Emoto, to know that it changed their lives. However, newcomers, who don't know anything about ionized water, can be helped by seeing how natural ionized water is. With misinformation abounding all over the internet, one needs proof and perspective. Water ionizers are not to be thought of as healing instruments, but ionized water is perfect water and perfect water is sometimes the exact thing a body needs to stay healthy or to heal itself.

Note: Because dozens of pictures were taken over the course of the water droplet freezing, if you click the image. below, to you can see the progression of the beautiful crystal forming.

Click the picture to watch the beautiful crystal grow! How is it That Ionized Water Has a Hexagonal Shape, When Other Filtered Water Doesn't?

Ionized water is different from ordinary filtered water. A water ionizer filters the water, plus in the process of ionization, the filtered water gets micro-clustered. In other words, it is made to have a more simple structure (closer to the structure of water in a natural, untouched, mountain spring). But the healthy minerals are not removed in the process. These qualities of ionized water are essential in returning water to its natural, crystalline shape:

There may be other features of ionized water that affected the results, such as the negative charge (oxidation reduction potential) of ionized water, it's alkalinity, or its molecular hydrogen content. It's not possible to say without more testing, but in any case it is clear that ionized water is perfect in its crystalline shape.

Dr. Emoto found that water from the tap as well as bottled water was polluted, and toxins damage the crystalline shape of water, causing it to fail to produce a beautiful crystal. His studies show the crystals created by city water, tap water, distilled water, bottled water and even most filtered (reverse osmosis) water produced ugly, disorganized forms when frozen. However, even that water can be returned to its natural, crystalline shape by putting it through a water ionizer.

What may be surprising to you is that super-filtration, such as reverse osmosis and distillation does not in and of itself help water return to its natural crystalline-shape perfection. Both reverse osmosis and distilled water remove toxins, but when they were tested they were found to produce ugly crystals. Dr. Emoto concluded that nature intended water to contain a healthy balance of minerals. Yes, remove the toxins, but not the healthy minerals. Good, healthy, minerals should not be filtered out of our water, and if they are, the healthy minerals need to be added back in. Our bodies need the water to have healthy, natural minerals in it.

Ionized water was proven by Dr. Emoto's photos to form beautiful crystals, and so this is just one more piece of proof that ionized water is perfect water. Another big deal is that ionized water has the pH of alkaline water, without any pollutants added. The body likes alkaline buffers, so it likes this water. There are so many  benefits of ionized water too, which is what I like. A water ionizer changed my life 25 years ago. See my testimonial.