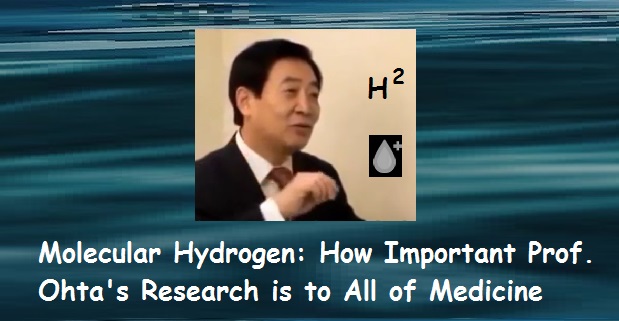 The main antioxidant in ionized water is basically free-hydrogen. Hydrogen (also called diatomic hydrogen, molecular hydrogen or free-hydrogen) is the single most effective and powerful antioxidant on the planet. When hydrogen is bonded to itself (H2) the bond is light. The extra electron (made by this bond) is free to bond with any free-radical and neutralize it easily and with no adverse effects.

Hydrogen is only free in the state where it's bonded to itself. What it means to be "free" is that it can readily bond to free-radicals. By doing this, free-hydrogen neutralizes free-radicals more efficiently and powerfully than anything else. When hydrogen is bonded to itself, it's considered an antioxidant, but unlike any other antioxidant. Other antioxidants will lose their free electron and then could then potentially become harmful to the body if not eliminated quickly. Hydrogen is so small and light that it simply evaporates once the electron has been donated. In this way hydrogen has been found to be like a miracle molecule. It fights diseases like crazy, but causes zero bad side-effects.

Molecular hydrogen has been studied in both animal and human studies for many years. Research in just in the past decade indicates that about every single organ in the body and nearly every major disease has been found to benefit from it.

The video is in Japanese, but is captioned. It is well worth taking the few minutes of your time, and a little patience, to watch.

Here are excerpts from the video:

More about Molecular Hydrogen and Why It’s so Special

There are plenty of antioxidants available in food, so why would one more antioxidant be so special? The first reason is size. Because of its extremely tiny size, molecular hydrogen can get into the cells to repair them, whereas other antioxidants are too large to do this.

The second reason is solubility. Molecular hydrogen is unique in that it is soluble in both water and oil. This makes it uniquely able to penetrate cell membranes to get in, fight free radicals and even repair cells after they have been damaged.

Third, it is completely safe. Some antioxidants become free radicals themselves, at least temporarily, after they donate their electron. However with molecular hydrogen, even after donating its extra electron to the most dangerous radical of all, the oxygen radical, it joins with oxygen (H2+ O) to become harmless, neutral, water to be safely eliminated from the body.

Fourth, the fact that it only removes the bad free radicals, and leaves the useful ones alone, is significant in helping the body maintain homeostasis.

Finally, the fact that molecular hydrogen signals the production of enzymes in the body which reduce the bad free radicals is icing on the cake!

Let's put it all of the above together with an example. Say you were inventing a device that would automatically clean up trash in the neighborhood. You would probably want it to be 1) small, 2) versatile (able to maneuver in and out of all kinds of places), 3) safe, 4) able to distinguish the actual trash (and not remove the good stuff), and finally you'd really know you had a winner if you even found a way to reduce the amount of trash produced in the first place.

How do You Get Molecular Hydrogen?

Molecular hydrogen can be administered in a hospital as a gas or and injection, but the safest and most user-friendly way to dispense molecular hydrogen is to dissolved it in water. Here are several cost-effective devices listed in order of effectiveness.

**Though a few of the devices are capable of producing medical grade levels of molecular hydrogen, not all brands and models of water ionizers and ionizing/filtering devices can do this.

Note: It probably isn’t necessary to get the full medical grade dose of molecular hydrogen to experience benefits. Many people have been experiencing benefits using water ionizers that have high ORP, but less than .4 ppm of molecular hydrogen (which is under the “medical dose” of the H2 molecule). There is definitely a lot more research that needs to be done, including doing a better job of standardizing the measurement techniques used.

Professor Ohta’s ground-breaking research in molecular hydrogen in 2007, Hydrogen acts as therapeutic antioxidant…, was published in the Nature Medicine journal. Because this is such a famous medical journal, read by thousands of doctors and researchers every month, hundreds of medical research scientists who read his work were so inspired that they did their own molecular hydrogen research to study the subject further. (Note: All studies show promise for molecular hydrogen as an effective treatment…no matter what the body part or what the disease. No adverse effects were reported.)

Professor Ohta obviously inspired researcher, Tyler LeBaron, whose expertise is as a biochemist. Mr LeBaron was so impressed with Dr. Ohta's work that he spent a year in Japan (reviewing and observing the front-line medical research being done there. In this video he shares his enthusiasm for molecular hydrogen and his understanding of the research being done around the world, along with its importance. He points out that molecular hydrogen is not only the most powerful antioxidant, itself, but it also has the power to recharge other antioxidants and trigger many healthy processes in the body. It is an anti-inflammatory, anti-allergen, and anti-obesity agent as well.

The list, below, are not citations for this article, but meant to be a partial list to demonstrate much of the follow-up research that Professor Ohta's research inspired. Simply copy/paste the date and title of any research article into your browser to see the full data about each.

(2016) The hydrogen molecule as antioxidant therapy: clinical application in hemodialysis and perspectives.

(2013) The evolution of molecular hydrogen: a noteworthy potential therapy with clinical significance .

(2012) Hydrogen holds promise as a safe and effective antioxidant for alcohol .

(2010) Extension of the Lifespan of Caenorhabditis elegans by the Use of Electrolyzed Reduced Water. Bioscience Biotechnology and Biochemistry

(2011) Effects of drinking hydrogen-rich water on the quality of life of patients treated with radiotherapy for liver tumors.

(2016) The potential utilizations of hydrogen as a promising therapeutic strategy against ocular diseases.

2010). Protection of the retina by rapid diffusion of hydrogen: administration of hydrogen-loaded eye drops in retinal ischemia–reperfusion injury.

2012) H 2 gas improves functional outcome after cardiac arrest to an extent comparable to therapeutic hypothermia in a rat model.

(2010) The Potential Cardioprotective Effects of Hydrogen in Irradiated Mice.

(2014) Effects of oral intake of hydrogen water on liver fibrogenesis in mice.

(2011) The protective role of hydrogen-rich saline in experimental liver injury in mice.

(2010) Hydrogen as a novel and effective treatment of acute carbon monoxide poisoning.

(2009) Hydrogen from intestinal bacteria is protective for Concanavalin A-induced hepatitis.

(2012) Hydrogen-rich saline reduces the oxidative stress and relieves the severity of trauma-induced acute pancreatitis in rats.

Molecular Hydrogen Research Related to the Lungs and Other Organs

(2013) Hydrogen-rich saline reduces airway remodeling via inactivation of NF-kappaB in a murine model of asthma.

(2013) Protection by hydrogen against gamma ray-induced testicular damage in rats.

(2010) Radioprotective effect of hydrogen in cultured cells and mice.