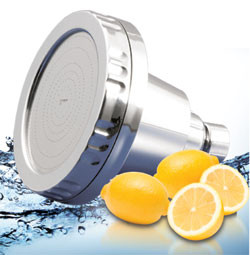 The Ultra PHresh is the Most Beautiful & Thorough Shower Filter We Sell!

The patented Ultra pHresh Ionizing Shower Filter is complete with large shower-head. It will not only remove chlorine and chloramine, but will also generate negative ions while you shower! It has a faster water-flow than any other shower filter.

Relax in a Dream-Shower today!

Get the Best Shower Experience Ever!

The Ultra pHresh Ionizing Shower Filter with Head uses only natural ingredients, and removes harmful chlorine and chloramines plus adds natural moisturizers that can help relieve skin irritations. The  Ultra pHresh Ionizing Shower Head also conditions and softens the water without using any harmful chemicals. You will feel as if you have been standing under a waterfall ... full of negative ions.

The Ultra pHresh Ionizing Shower Head is powerful and firm, yet at the same time it uses about half as much water and energy as other conventional shower heads of the same size. So it's a no-brainer...save money on water while improving your shower experience!

Note: If you have hard water and the water-flow slows down, the patented ionizing plate is removable so you can clean it.