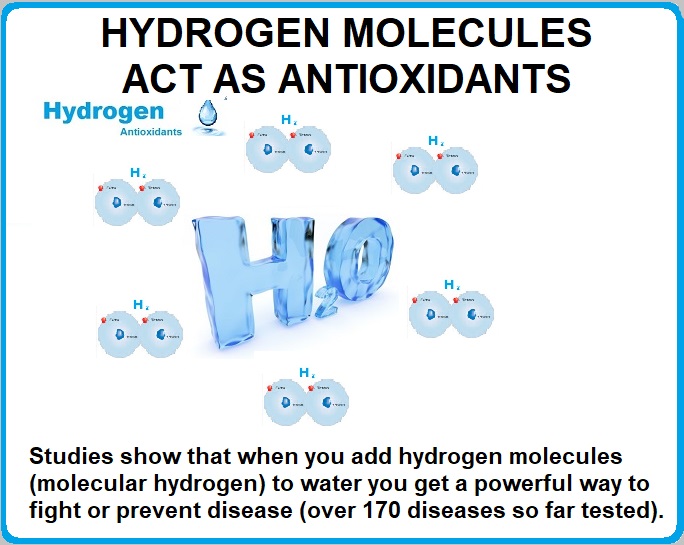 Hydrogen water is not the same as regular H20 (normal water). It looks and tastes the same, but it's better, because it contains molecular hydrogen Molecular hydrogen is simply two hydrogens lightly bonded to each other. Molecular hydrogen is rare to be found close to the earth's surface, because it's so light. It evaporates. Where it has been found and used naturally, such as in the caves at Nordenau, it has proven to have healing benefits. Also, where these hydrogen molecules have been added to water (with a water ionizer or other type of hydrogen machine) the same benefits can be seen. Hundreds of research studies have found this to be true.

Ordinary water contains hydrogen, but it's already bonded to oxygen and is not free-hydrogen. Tap water and bottled water, alike, contain zero molecular hydrogen, in other words - zero hydrogen antioxidants. In order to obtain hydrogen antioxidants, one has to have them pumped into water with a water ionizer, a hydrogen machine, an ionizing filter or hydrogen tablets dropped into water. 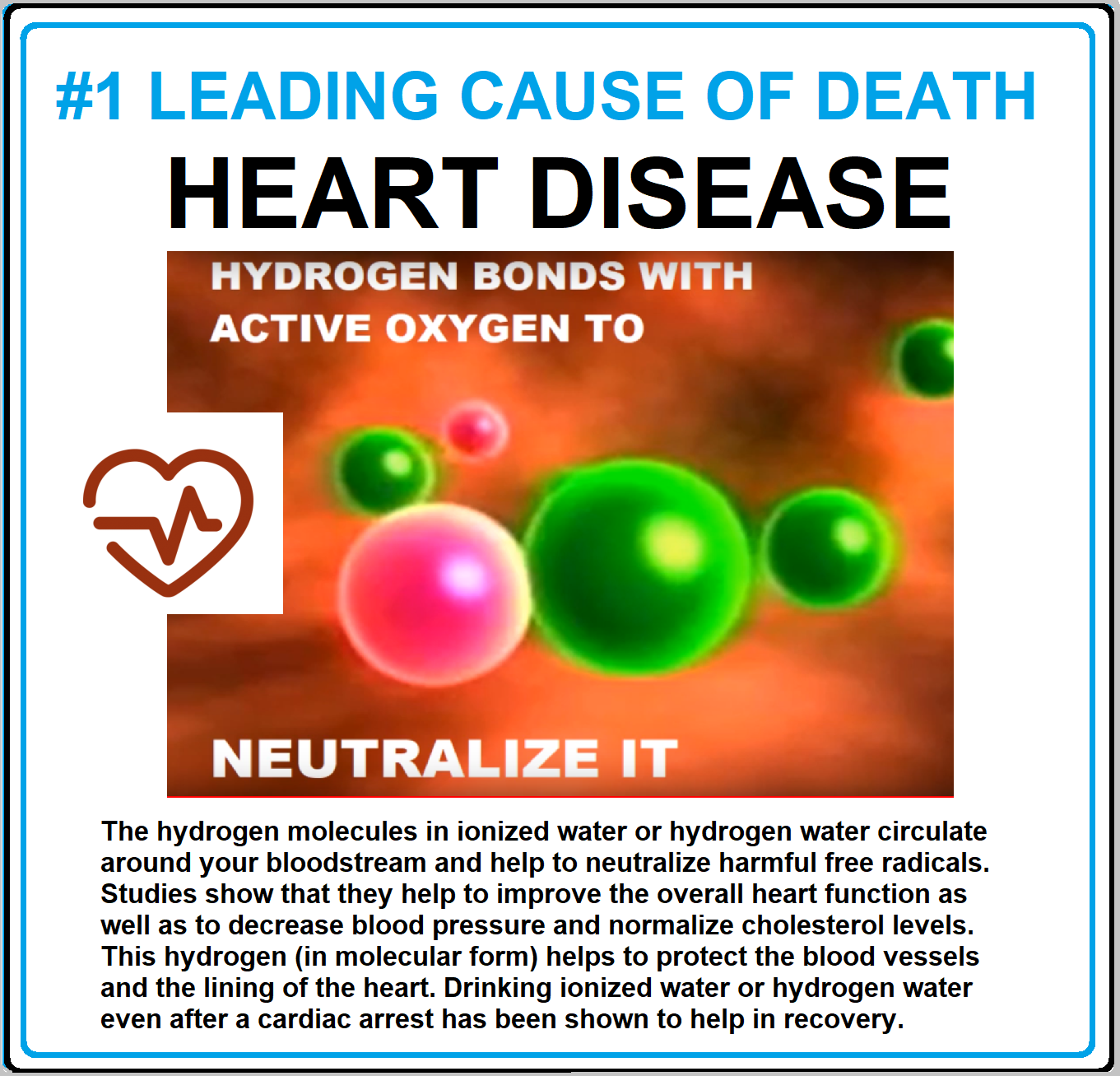 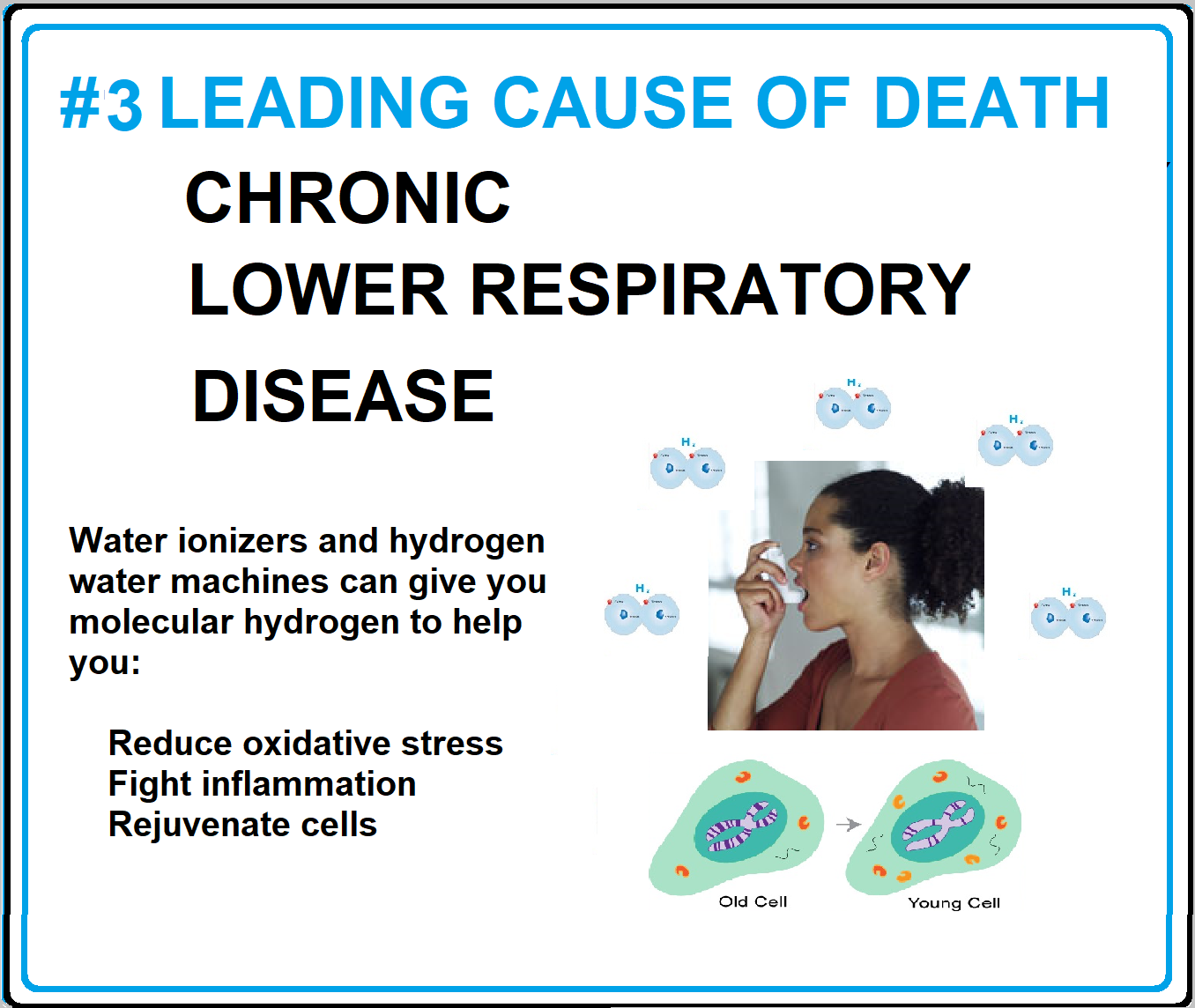 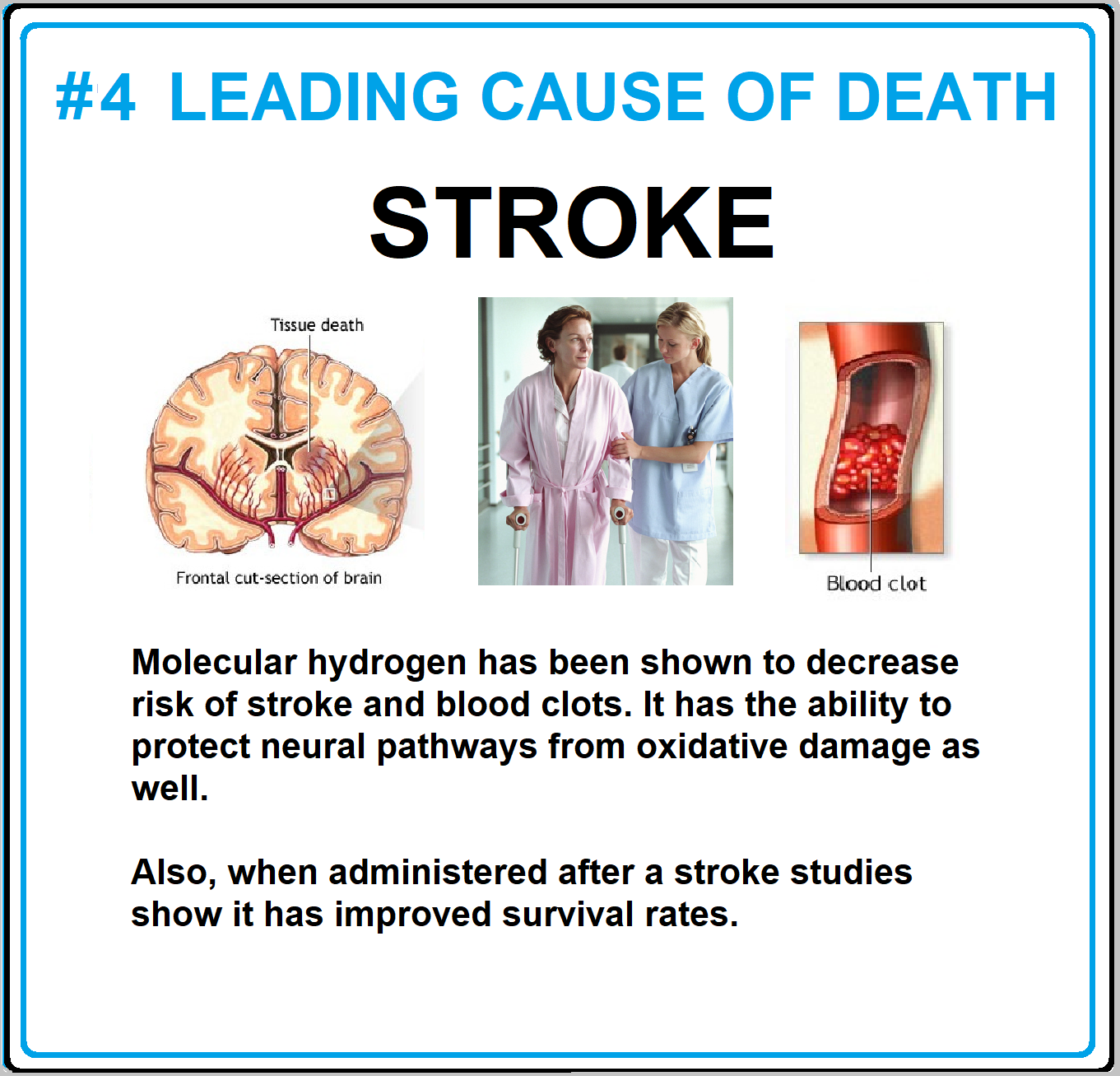 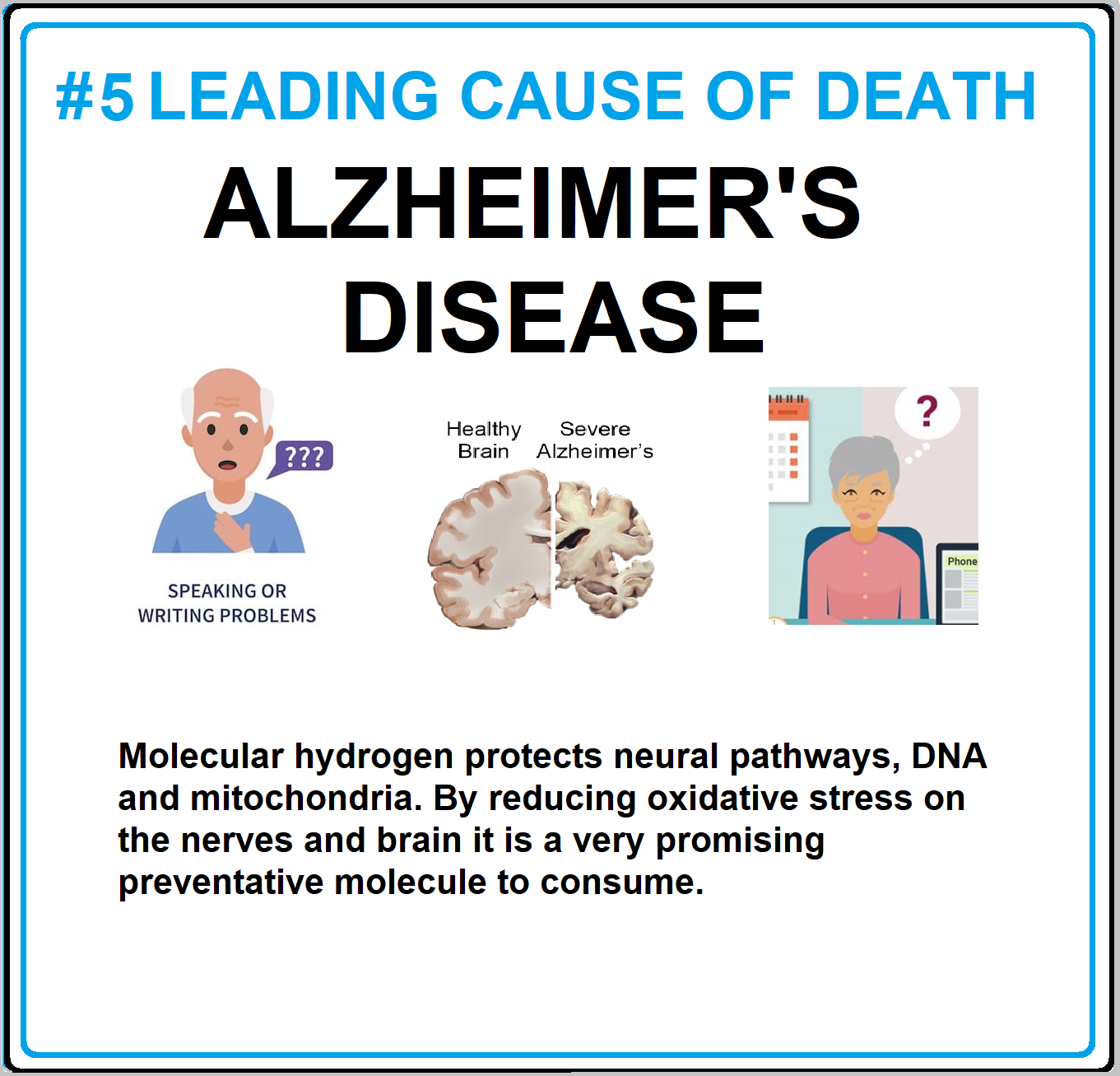 Hydrogen water contains hydrogen molecules. In this form hydrogen has been known to fight or prevent over 170 diseases, including heart disease, cancer, stroke and Altzheimer's disease (the top killers in the U.S.). Here is a partial list of diseases hydrogen antioxidants (molecular hydrogen) have been shown to help. Click here to see details about the actual scientific research studies, themselves.

If you go to our Scientific Studies page you can see the actual research on this. Molecular hydrogen antioxidants, in its many forms, such as hydrogen water and hydrogen gas, has been seen to positively influence, ameliorate, or even reverse many diseases. There have been over 170 diseases to date shown to be helped by hydrogen. Please note that we are not making medical claims by reporting this data. The data on this page represents (demonstrates and summarizes) the latest research into the important topic of hydrogen as it relates to one's health. In addition to this data, for those who want to read more, I have also posted links to each of over 100 scientific research articles on the Scientific Studies page.

Therapeutic free-hydrogen is such a new subject, is so unique, and has such wide implications in treating and preventing disease, it deserves spending some time studying it to catch up on this important science. Consuming hydrogen water and ionized water has no side effects; is completely safe in any amount; and thousands of articles have been written so far showing its therapeutic value in both preventing and eradicating diseases. For actual scientific literature about hydrogen water, ionized water and hydrogen gas, again - see our Scientific Studies page.

Definitions, Background & Basics: For anyone who gets lost in the scientific terminology, I have some key points bulleted for you:

Molecular Hydrogen is truly the best antioxidant. The health benefits of this tiny molecule are just touching the surface of public awareness right now. The ground-breaking studies of molecular hydrogen have been going on for about 30 years, but really took off about 10 years ago with Dr. Ohta's scientific article about molecular hydrogen explained. When Dr. Ohta discovered and proved that molecular hydrogen acted as a selective antioxidant (didn't destroy the "good" free-radicals -- only the bad), that lit a fire among other researchers, who were frustrated by the problems that were presented by other antioxidants. Here is a video where Dr. Ohta of Japan is being interviewed by Tyler Lebaron of the Molecular Hydrogen Institute about his dozen years of research into the medical uses of molecular hydrogen and its safety.

Notes From the Interview: Molecular hydrogen, also known as hydrogen gas, can be consumed most conveniently when dissolved in water.

Molecular Hydrogen is known by many prominent researchers world wide for its ability to truly penetrate through cell membranes (even the blood-brain barrier) and scavenge free radicals.

Hydrogen at the Root of Life

School children know that the combination of H2 and Oxygen makes water, which is at the source of all life. Oxygen also brings life, but unfortunately complications arise when there is too much oxidation within the body and there is not enough balance of hydrogen. This condition is called Oxidative Stress is thought to be at the root of almost all disease. Oxygen can actually become a dangerous free radical within the body when it has lost its electron balance. When it's in this state it's called Active Oxygen. While Active Oxygen is capable of causing a terrific amount of damage to cells, tiny little molecular hydrogen can calm it down completely; neutralize it; turn it into harmless water or gas and safely escort it out of the body. This is done with no harmful waste or byproducts produced.

Recent research has shown that hydrogen is able to safely neutralize active oxygen and render it utterly harmless. (See links on the scientific research studies page.) At the same time molecular hydrogen doesn't attack good radicals in the body. It will never act as a poison to the body, and any excess of it will simply evaporate harmlessly and combine with oxygen in the air to hydrate or moisturize it.

Hydrogen machines and ionizing water filters are some other wonderful ways to consume molecular hydrogen.

How Much Molecular Hydrogen Do We Want In Water and How is it Measured?

Scientists studying molecular hydrogen's positive effects on health suggest that a range of .5 ppm (parts per million) to .7 ppm are desirable. Most medical studies have used these levels.

The concentration of 1.6 ppm is considered the concentration of "complete saturation", because it is the concentration that would exist if only hydrogen gas were present in that glass, at the pressure of sea-level. But any level greater than 1.0 ppm has not used in studies and is probably not needed by the body. That being said, there is no known toxicity-level of molecular hydrogen.

There are 2 main ways to test hydrogen concentration levels in water: 1) with a Trustlex Hydrogen meter, 2) with methylene blue drops dissolved in ethyl alcohol with colloidal platinum. The problem with the drops is that their accuracy is not consistent. This may be due to the fact it's impossible to ensure perfect concentrations are in the bottle, unless you made the solution fresh that day. Or, it could have to do with the fact that the dropper does not give out the same sized drops each time. So, I do sometimes use the drops, but my favorite way to test for molecular hydrogen is with the Trustlex meter. There are complications with the Trustlex meter too. You have to make sure it is moistened up sufficiently before testing and that the platinum probe is completely free of any mineralization whatsoever.

Does Hydrogen Gas Actually Dissolve Into the Water?

Yes. When you test the water for hydrogen levels, you are measuring exactly that: how much hydrogen gas is dissolved into the water. If you lower the temperature or increase the air pressure, this can effect the amount of hydrogen that can be initially dissolved into the water. But after initially dissolving in water, the hydrogen will start to dissipate out of solution at about the rate of half of the concentration every 2 hours (called a half-life of 2 hours). You can extend the half-life by using a better container for storage, such as my vacuum sealed stainless bottles. The best practices are: 1) drink molecular hydrogen enriched water fairly quickly after making it, 2) store it in the right container, especially if you aren't going to drink it right away, and 3) drink lots of it all day long.

That very same hydrogen gas half-life, mentioned in the last paragraph, applies to the amount of time you can expect molecular hydrogen to remain in your body. But recent research indicates it tends to continue working for you (to fight free-radicals, prevent disease and to even reverse free-radical damage and allieviate disease) for up to several days after drinking. The reason for this extended benefit is unknown.