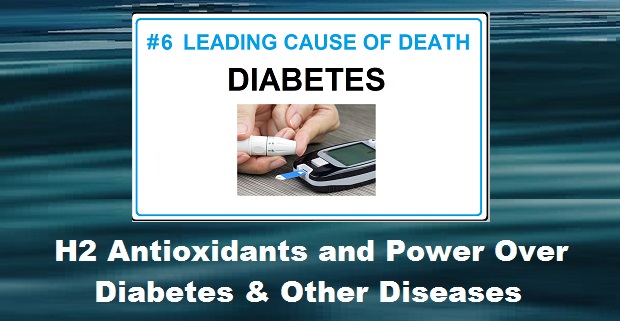 H2 antioxidants help reverse diseases, where no other antioxidant can. Why?

The research on H2 hydrogen gas (called free-hydrogen or "molecular hydrogen" by scientists) shows it is a powerful antioxidant. Its unique ability to prevent or reverse diseases is exciting, important, and should not be overlooked!

It's a historical fact that Japan used to be the worst rated country for health just after WWII and now they are the healthiest nation on earth. Japan's medical protocols were made to be very strict after WWII, because their population had reduced to such dangerous levels. The majority of Japanese at the time were also financially stressed as well as quite ill. The Japanese government took measures to remove medical research from the "profit-based" system that they subscribed to prior to the war. The government would only pay for and validate treatments that were proven beneficial to health and were cost-effective as well. Ionized water was seriously studied at that point, and because they were proven beneficial, they quickly made their way into Japan's healthcare system. Japan may be  sinking back into a profit-based medical system now, but the world is enriched by the knowledge their medical researchers acquired when their fight to survive was at its peak.

So, researched knowledge about H2 antioxidants grew out of Japan's need to recover from the war, but even though these results are clearly seen in Japan studies, the data is still in its infancy in the US. Japan was literally a dying nation and needed to focus on survival as a race for their top-priority, but we live pretty well in the US, and are not in any danger of extinction. In fact our average life-span is rising. The problem is that as our population grows older we have learned to expect to lose our quality of life. We expect our health care costs to rise and our mobility and other abilities (even mental functions) to decline. But it doesn't have to be this way. I don't expect this for myself or my family. I pay almost nothing for healthcare today, when 25 years ago I regularly paid a lot to doctors for various remedies. Also, as a side-note, even though I have the best water ionizers for myself and family, I pay far less for water than most people in the US do.

A lot of research has been done to show that hydrogen water and ionized water help diabetes in numerous ways. Click the link, above, to go to this research page.

One particular research analyst stands out, Nate Darnell. In this video, Mr. Darnell tells about his experiences (as a diabetes researcher and counselor) of doing research on the topic of molecular hydrogen and its ability to heal many of the condidions related to diabetes. His focus of research was to find out how to help his diabetic community improve, health-wise. He found many answers with what he learned about H2 antioxidants. He studied research from around the world, including both Japanese and German studies. His findings can be seen in this video and a summary is below the video. He delivers a compelling presentation on the phenomena of hydrogen gas (sharing many instances of hydrogen antioxidants causing spontaneous remissions in diseases, such as diabetes & cancer).

Video & Transcript (Also, see excerpts of the transcript, at the end)

Researcher, Darnell, was looking for long-term solutions and control for diabetes. His conclusion after much research, was that electrolyzed reduced water (in the US known as ionized water) has the potential of playing a major role in helping diabetic patients, both type-I and type-II, and a vast number of other diseases. Water ionizers produce hydrogen gas, H 2, a powerful, natural, and very unique antioxidant.

Ionized water is Hydrogen-rich, and is the most powerful antioxidant there is because of its tiny size. It has been found that hydrogen gas (specifically created from a water ionizer) improves the prognosis of diabetes patients, and a multitude of other diseases.

Comparing H2 With Other Types of Antioxidants

Terminally-ill patients (many of whom were diabetics) went into remission, when they breathed in and drank the hydrogen rich water and air of the cave in Nordenau, Germany. This research was duplicated by the Japanese.

In other words, H2's power to enter cells, makes it able to prevent DNA damage and other damage to cells. Doing this can prevent horrible diseases.

The one down-side to the tiny size of H2 is that it doesn't stick around all day, so you have to continue consuming it on a regular basis in order to continue to benefit from the antioxidants. Ionized water is the answer to how anyone can have access to the antioxidant benefits of hydrogen gas. Ionized water is: 1) rich in hydrogen gas, and 2) is something that is fairly easy to sip on all day long.

Any other means of obtaining hydrogen gas would be more constrictive. For instance, for people to breathe  hydrogen gas, one has to sit still for a period of time.

Hydrogen Gas Needs to be Consumed When You Produce It

Using a water ionizer, the production of hydrogen gas on demand, 24/7, and for only pennies on the gallon becomes possible. The hydrogen gas goes into solution of the electrolyzed water (meaning it becomes dissolved) and stays at maximum levels in solution for about 4 hours. Then it tapers off after that. Finally after 48 hours it has dissipated from the water, which is now just ordinary water once more. The point is that with electrolyzed ionized water one should drink it when it's fairly fresh, within about 4 hours. There are other methods of consuming hydrogen gas, such as breathing it in, however those also need to be consumed immediately. If you want to store it to take to work with you or something like that, read about the only ways I have found to successfully store ionized water.