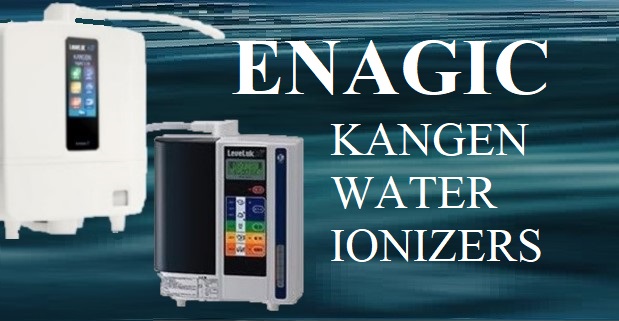 Enagic Reviews: We Have Found that Kangen Machines are Good but Not the Best Water Ionizers.

Why Do I Say Kangen Water Machines Aren't the Best?  It is because of our extensive testing of the Kangen SD501 water ionizers [otherwise known as Kangen Water] that we don't regard them as the best. We tested Enagic Kangen alkaline water machine against pretty much all of the other good water ionizers. You may have seen many of our articles about Kangen water over the years on our blog. We do feel that the Kangen alkaline water machine is one of the best water ionizers, though. For instance their flow-rate is very fast. The Kangen machine can produce several extra gallons of ionized water per day [more than most other countertop water ionizers].

Over ten years ago we started testing the kangen ionized water. Like many other water ionizers, people drinking Kangen water are experiencing great health benefits. These benefits, despite being touted as exclusive to Enagic water ionizers at Kangen meetings, are not exclusive at all to Enagic sd501 Kangen water machines. I have been drinking ionized water and experiencing tons of health benefits for too long to be fooled by any idea of exclusivity when it comes to health claims in particular by MLM representatives.

Enagic water ionizers' head US office has determined that no one may represent Kangen Water if they also sell other brands of water ionizers. This is the main reason why Alkaline Water Plus does not sell Kangen water machines. Because we don't think they are particularly the best water ionizers, we of course could not exclusively sell only the kangen machine.

Here is a video done by a Kangen dealer. I'm sharing this video here to show that 1) Enagic SD501 Kangen water does contain molecular hydrogen antioxidants, and 2) this video shows that the Enagic SD501 can produce about .2 ppm (2/10ths) parts per million of hydrogen antioxidants at Kangen Water 9.5 when tested by this particular Kangen dealer. Note: Differences in testing around the internet can be for many reasons, but the two most common ones I've found are: 1) the tester's expertise and 2) the source water.

I have tested hundreds of water ionizers, and have mastered the techniques of accurate testing, Throughout this website you can see many of the comparison tests I've done. In the next section you can see my own molecular hydrogen and other testing, comparing it with one of the high-producing water ionizers that I sell.

The Enagic K8 tests better than the Enagic SD501 by far, but still you don't need to spend 4 or 5 thousand to get good pH, ORP and Molecular Hydrogen results!

The following two videos show that the Smart 7P Water Ionizer is better than the Enagic K8 Kangen water machine in producing molecular hydrogen (antioxidants). They both produce the same results for pH, ORP. In other words, you do not need to spend a fortune for healthy, highest-quality, antioxidant ionized water.

This next video shows the Melody II water ionizer testing. This water ionizer is also considerably better than the Enagic K8 machine in its testing results. The Melody II also has 1) better filtration, because it uses UltraWater filters, 2) continuous-cleaning, 3) a better warranty and 4) a fantastically better price than the Kangen machine.

Accuracy of my Water Ionizer Testing

I do side-by-side comparison testing for two reasons. First, it is a way to show myself and others that the source water, testing equipment and all other factors are controlled (in other words, it reduces the number of variables and so improves the reliability of the data.) In this way you can see which one is better than the other. When you look at isolated, random tests of water ionizers around the internet, there are too many variables to realistically compare them.

Secondly, it helps me to know my meters are performing correctly. If one water ionizer tests high and one tests low, for instance, then I know the low-testing ionizer is really low and not just a poor result because my meter needs cleaning, or something like that.

I don't like to use just one test either. Over time, with lots of this type of side-by-side testing, you can truly get a feel for the highest performing water ionizers. I share the videos with you, so that you can see this too. There is more about this on my Water Ionizer Comparisons page.

All of the water ionizers I sell are top-performing. You can see them on my Water Ionizers and Filters page, sorted in order of best overall water ionizers first. For even better deals, I suggest you visit my Refurbished Water Ionizers, which are all like-new with full warranties.