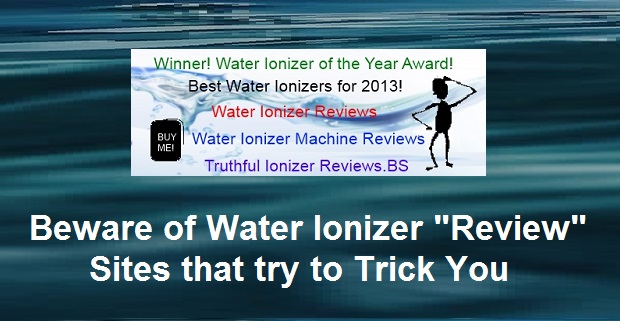 As a former teacher/principal I make it my business to find out everything about the subject of water ionizers, so that I can then educate you in the subject in an honest and straightforward way.

Because we import the Nexus water ionizers, we have an obligation to post this rebuttal and expose their phony reviews. Here are the phony water ionizer machine reviews that they have been published.

"http://ionizerresearch.com/videos/" [The son in law of Joe Boccuti, owner of Tyent USA, purchased the X-Blue water ionizer seen in the top video on this page/link. Pretending that he bought it for his mother who didn't want it after all, he returned it asking for a full refund. The machine was screwed back together with all the internal parts dismantled. He claimed that that is the way the machine was sent to him! After a little digging, I found out that the customer's wife was Natalie Boccuti Collins, the daughter of Joseph Boccuti, owner of Tyent USA! - The Nexus X-Blue water ionizer wasn't tested. It was just dismantled and shown in the video with lots of talk, pretending to give you valid facts, warnings and comparisons.

The Truth About Nexus Water Ionizers

Nexus Water Ionizers are fantastic. We discovered them a few years ago, when we were  asked to evaluate their water ionizer, the X-Blue, for possible inclusion on my site. After giving a great evaluation, I was given the opportunity to import the Nexus brand of water ionizers, which I did. Nexus is made in a major Korean manufacturing plant and Nexus has been a reputable brand for the past 13 years. After checking them out thoroughly, I found:

1) The Nexus brand is highly thought of and very well known in Korea. They are actually leaders in the medical community for exploring the various benefits of ionized water within clinical trial settings.

2) The ionizers are made at the biggest water ionizer manufacturing plant in Korea. [This is the same plant that manufacturers products for Samsung, LG and other big names]

3) After testing the ionizers I found them to be sturdy, with better-than-average quality of materials, and the results [pH/ORP] were excellent.

4) After comparing Nexus brand water ionizers with other water ionizers on the market we found them to be worthy of the mid-price range for their retail price, but chose to force the prices to be lower than average for one reason. I wanted to have a good, reliable, non-Chinese-made, water ionizer to sell to my customers. With the Nexus Water Ionizers we were able to offer drastically reduced prices by cutting out the middle-man and selling directly to the customers.

5) Because of the high-quality of materials and workmanship of the Nexus water ionizers, and the excellent customer service, training and support Nexus offers to us as an importer, we are able to offer a very competitive lifetime warranty as well.

You can read more about my honest reviews here: Water Ionizer Reviews