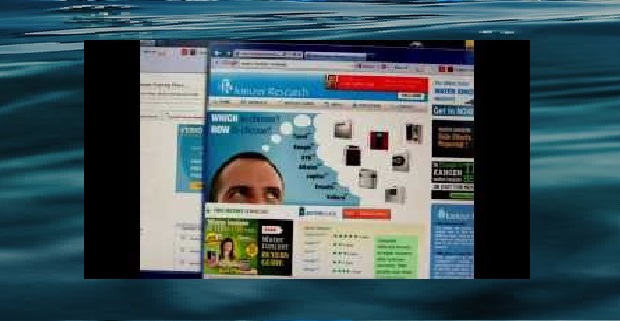 Keep on the lookout. The market is flooded with fake water ionizer reviews. I am not saying to stay away from reading customer reviews…not at all. But, obviously you want to focus on reading real reviews and not hype and false information.

Almost all of the existing "review" websites are pretending to be non-biased. These are fake “water ionizer reviews” or “water ionizer machine reviews” because they pretend to be independent when they are secretly owned. You really have to know what to look for or you will be tricked. It is hard to know who is telling the straight story, and many water ionizer reviews & comparison sites don’t clearly tell you who they are [i.e., name, address, and what products they sell].

The first trick is to make everything look official, using pictures and icons that forward their image. But they leave out one important piece of information: who they are.

By being privately-registered, and looking official you can get away with almost anything these days. Why would a water ionizer review website or water ionizer comparison website not divulge who they are? Money. Being private, allows them to post false information about other companies and their products [without fear of law-suit]. It's easy to build a website and have it privately registered, and that is a trick that many online retailers do in order to sway business in their brand's direction, while steering them away from their competitors. Some people do catch on, but it's a difficult thing to spot.

What’s the problem with privately registered water ionizer review websites for the consumer?

Privately registered websites are giving their readers false and misleading information. They are confusing consumers and making it nearly impossible to get the factual and helpful information that they are looking for.

These websites are all over the place! They are growing by leaps and bounds, because it is so nearly impossible to sue them or stop them in any way. And, they are filling up the webspace with noise and distraction.

Danger! You Can Actually be Harmed Reading Reviews from an Unregistered Website!

If the website owner cannot be held accountable for what they are saying, they can (and do) say anything. They can tell you lies about their own products (how much better their product is than all others…this type of thing) or lies about competitor's products that are really good products (trying to scare you away from buying the competitors products). Customers can be harmed by being tricked into buying poor products or tricked away from buying great products.

These Water Ionizer Review sites will of course not state that they sell products, because they are attempting to appear neutral and unbiased [and private]. On the “About Us” page they will tell you all about their “philanthropic” goals. If they tell you the name of their “reviewer” it is most assuredly a phony one. On the “Contact Us” page they will give you a little contact form to fill out. Then if you try to contact them they will ignore your every attempt if it doesn’t suit their agenda to answer you. Their “information” is wrought with false, misleading statements about all of their strongest competition.

Water Ionizer Reviewers - Responsibility for What They Say

I do water ionizer reviews and comparisons all the time, and I can tell you that I am held responsible, 100%, for what I say about all of the water ionizers I report on. The reason why is that I make no attempt whatsoever to hide my identity. If a company feels I have misrepresented them in some way they write to me. I tell them where to write to me, call me or email me right on my website. I have gotten letters here and there from companies who have felt I didn’t represent their water ionizer properly. Usually this happens because I have been writing articles for so many years the facts may change and the article may need to be updated. In all such cases I then re-visit the offending article and update it. Very simple and very honest.

My Own Personal Experience with Being Harmed by a Privately-Registered Website Owner.

An example of this corruption happening to me is the website waterionizermachinereviews.com, which I have had a recent run-in with. The owner carefully conceals who he is, although it’s pretty apparent which water ionizers he is affiliated with. He posts his “reviews” as a pseudonym “Evelyn Marks” and then picks various websites to defame with his phony reviews.

In this particular case I am left with no recourse, because his identity is hidden.

Another trick [similar to fake water ionizer reviews] is: phony “water ionizer of the year awards”. This is where a website owner owns several sites [some of them fake review sites] and then they contrive that their water ionizer has won awards, when they actually just awarded themselves.

The awards that I actually pay attention to are real awards that have been given to certain water ionizers by totally legitimate, non-biased entities [such as Japanese or Korean governments, agencies or newspapers] and I’ve tried to place these on my site comparison chart wherever it was verifiable that the ionizer earned a legitimate award. Some examples are:

When I first decided to sell water ionizers back in 2007, I tried to look up “water ionizer comparisons”, or “water ionizer reviews”, and noticed all companies claimed their water ionizer(s) were the best. I didn’t see what I thought was a non-biased site. I also saw a lot of talk and very little actual testing going on. That’s about the time I decided I wanted to know what the different water ionizers were capable of and how they really compared with each other. So I started to test them myself.

Actually, in all of the top 20 review websites on Google, I found only 2 websites who divulge who they are…mine was one of them.

I have spent many hours testing and comparing the various brands of water ionizers so that I can truly give accurate, factual reviews. Read more about my Water Ionizer Reviews.

I do encourage you to look at authentic customer reviews on unbiased websites, though. Because water ionizers are worthy of your attention! You can see reviews for any of my products at the bottom of the product page for that item. These reviews are coming from customers who bought that item from our online store. This is the type of location where most of the honest reviews for a product will appear.

#1 in Importance: How Well Does the Water Ionizer Perform?

One other food for thought on truly reviewing a water ionizer is, “How well does that water ionizer perform in various source waters?” I’ve done a lot of testing in Missouri, some in Georgia and some in California, but have a ways to go before I can say I’ve tested every type of source water. Typically with soft water it requires a more powerful water ionizer. With hard water a continuous-cleaning ionizer works better.