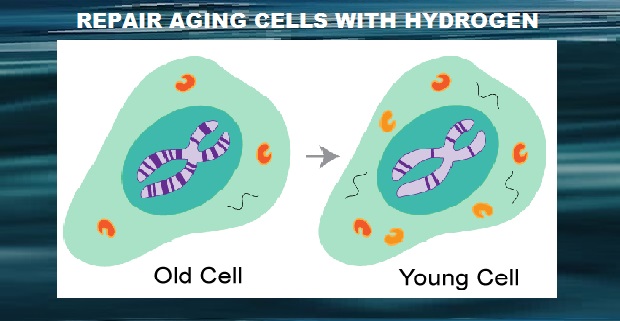 Senescence (səˈnəsəns) is a scientific term that basically means “aging”; it refers to a process of cells losing their ability to divide and renew. A lot of research is happening right now on the topic of senescence. As cells age, they often eventually stop working (turn themselves "off"). This is a natural part of the cycle of life, but recently scientists have found that a very special antioxidant, Molecular Hydrogen, can repair those cells (or even reduce senescence) and therefore extend the cells’ ability to rejuvenate.

When you repair aging cells they act young again. But what's wrong with the aging cell? Researchers believe that senescent cells (inactive, damaged cells) are not just inactive. They're actually bad for the body when they accumulate to high levels. They're not really dormant as they once were thought to be. The presence of old, inactive cells in abundance contributes to inflammation, which in turn causes conditions like arthritis and further deterioration of the body. Because of this, it is theorized that if once a cell has stopped being able to do its job, it was either removed or fixed, it would alleviate a lot of ills.

Cellular aging (or senescence, as it's known in the scientific world) is now known to be somewhat reversible. There are two ways being worked on right now to handle the aging cell: 1) kill it, and 2) fix it.

Killing the aging cell is certainly one way to tackle the problem. Researchers working on this are showing some promise that doing this can slow down the aging process. But ridding the body of senescent cells is only theoretical and has not come close to the human trial phase yet.

Fixing damaged cells, however, has already reached the human trial stage with trials where test subjects consume Free-hydrogen (also known as molecular hydrogen) in a variety of ways. Hydrogen consumption has been shown to be both safe and effective. Hundreds of studies have been done so far, showing that Hydrogen as an antioxidant is effective in reducing or alleviating many ills. One theory of why Molecular Hydrogen seems to cure so many diseases, is that it goes in to repair the senescent cells, which were damaged by free radicals, and get them back to their former youthful operation. Repaired senescent cells act like normal cells again. So, they don’t cause inflammation any more. Thus far, no antioxidant other than Hydrogen, has been shown to be able to do this.

Free-Hydrogen is quite harmless. Unlike other antioxidants, that can sometimes turn into free-radicals after they have donated their electrons, Hydrogen can scavenge even the most dangerous Active Oxygen radical and when done with its repair work it either evaporates or turns it into water.

Free-Hydrogen is a Novel Antioxidant

It is important to note that other antioxidants, such as vitamins C, E and A, having recently been tested, have not been validated by research as having the ability to reduce senescence. Free-hydrogen (Molecular Hydrogen) has been validated, though, many times. It is small enough to enter into cells, and get past the blood-brain barrier, so it is a very unique antioxidant, and is powerful in its cell-anti-aging abilities.

Free-Hydrogen in your body allows you to bring more oxygen and hydration (water) to your cells without the added risk of cell damage.

How Do You Get Free-Hydrogen?

One would think free-hydrogen would be easy to get, however it is rare to find free Molecular Hydrogen close to the earth's surface. It is so light that it evaporates and does not stay near the ground. If it is bonded to other molecules (other than itself) it isn't "free". In a bonded state it's the most common element, but it can't fight free-radicals in this state. For instance, hydrogen is in H2O (obviously), but normal H2O can't fight free-radicals. It has zero antioxidants in it.

There are a variety of devices that can create hydrogen water. My personal favorite is a water ionizer, which both alkalizes and pumps hydrogen into the water. My second-choice for getting Molecular Hydrogen is to use a HydrogenWater Generator. These won’t alkalize the water but they do pump Hydrogen into it.

An earlier article I wrote about Hydrogen explains in more detail about the various medical studies which validate it as an effective and powerful antioxidant.

Refer to the following scientific papers for further information related to the healing abilities and safety of Molecular Hydrogen with specific reference to solving the problem of cellular senescence (aging).

The study is geared to showing that molecular hydrogen (H2) has beneficial vascular effects and therefore hydrogen-rich water may prove to be an effective anti-aging drink.

This article shows that molecular hydrogen (H2) is a very unique antioxidant and can both prevent and cure many ailments. With no adverse effects, it doesn’t affect the normal cell functions or signaling. It permeates cell barriers to effectively repair cells after oxidative damage has occurred.