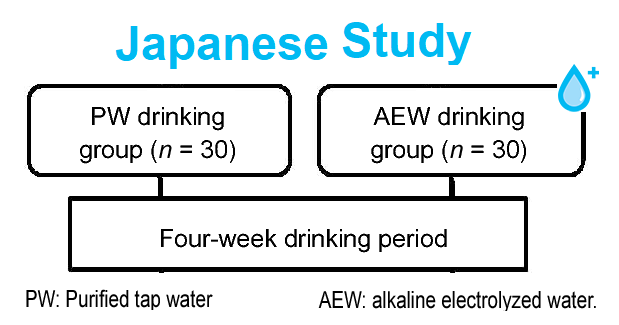 A New Kind of Study of Ionized Water:

In late fall of 2018 a new kind of study for ionized water (alkaline electrolyzed water) was done, which focused on the health benefits of ionized water for already healthy people. Would drinking ionized water make them healthier? (Name of Study: Daily Ingestion of Alkaline Electrolyzed Water)

How The New Research Was Different

The Japanese researchers in this study  were more interested in selecting subjects who weren't complaining of gastrointestinal or any other health issues in particular. The purpose was to simply see if just average people showed benefits from drinking alkaline electrolyzed water.

The subjects selected were completely random people who didn't complain of health issues. They were separated into two comparable groups for the trial. None of the subjects were made aware of which group they were in or the nature of what kind of water they were drinking.

The purpose of this study was to take a good look at average people and at other benefits of ionized water. This was a double-blind study, meaning that neither the subject nor the administrator was given data about the type of water given to them. The study showed significant improvements on the part of those (average people) drinking alkaline electrolyzed water, as described below.

Subjects in the AEW Group drank alkaline electrolyzed water, and subjects in the PW Group drank purified water (they were the control group). All subjects were instructed to drink 7 oz. water upon waking up and then at least 10 more ounces throughout the rest of the day.

Electric water ionizers were used to make the AEW (alkaline electrolyzed water). The pH of the water was 9.2 for the AEW Group and 7.6 for the other group.

Before, during and after the trial blood tests, physical fitness evaluations and questionnaire evaluations were conducted.

Here are the results:

I Can Fully Relate With the Results of This Study