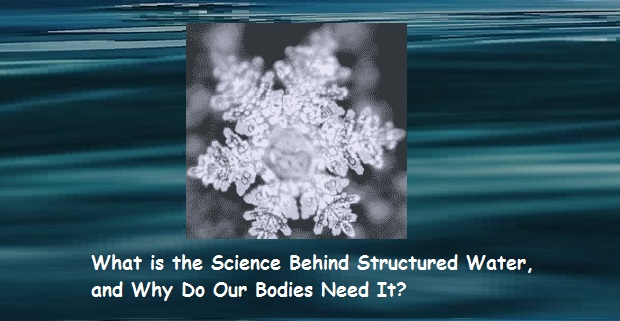 What is Structured Water?

Structured water is the kind of water found in living plants and animals. It is water molecules lined-up in an orderly fashion. This type of orderly water can enter cells easier and better hydrate them. It can reject toxins and disease, and it has a much higher potential energy than regular water.

Many scientists have done studies on the healing properties of water, including those who have observed differences between municipal tap water, vs. the healing waters of famous locations (i.e., places famous for longevity - where people tend to live much longer and healthier lives than we do). The water from sources, such as Lourdes in France; the glacial rivers of the Himalayas; and the mountain streams of Vilcabamba, Equador has been studied by scientists for over a hundred years.

Researcher, Dr. Emoto, called the water “hexagonal water”. Dr. Ben Johnson called this water “antioxidant-rich”, “negatively-charged” antioxidant-water. Dr. Gerard Pollack called this water “structured water”. They are different ways of saying the same thing, but more about each below. Dr. Pollack’s “structured water” theory seems the most scientific and in-depth. Seeing that he is an electrical engineer; bio-medical engineer; and has the facilities of the University of Washington at his disposal in his research, I'm sure helps to account for his recent advancements in the subject.

Dr. Emoto studied water for two decades, and recorded his observations about distinct differences between the healing waters and municipal tap water in several books. Water droplets from various water sources were put on a slide and then flash-frozen. The healing waters appeared Hexagonal, in the shape of a hexagon, when they were flash-frozen. They looked like a symmetrical snowflake in fact. This perfect-looking crystalline shape, similar to a magnified snowflake, was not found when drops of polluted or even municipal water were flash-frozen. He also experimented with distilled water, bottled water and other extremely filtered water and found it to not have the hexagonal shape that he had found with the healing waters.

I mentioned Dr. Ben Johnson, because of his work studying both healing waters and ionized water. He traveled to Vilcabamba, Ecuador, to study the water there, which was said to be healing water. He found that the people there didn’t need hospitals and lived to be well over 100 regularly. They attributed their health to a mountain stream near their town. Dr. Johnson took his equipment to the stream; measured the pH and ORP of the healing water; and found it to be alkaline and ionized, with a negative charge. Thinking there was a correlation between healing waters and ionized water, his traveling companion, Jay, the CEO of IonLife company, sent water from a Jupiter Orion water ionizer to Dr. Emoto (who was a fairly famous expert on healing waters by that time). Dr. Emoto tested the ionized water, and in fact it did have the same properties as the other healing waters that Dr. Emoto had become famous for testing. Here is a picture of the beautiful, crystal-shape created by ionized water while it was being flash-frozen.

Dr. Gerald Pollack, a bio-medical engineer for over 4 decades, has also done extensive research for 15 years on water, in particular cellular water, and he is still studying it. He has developed some interesting theories about water, which he recently published in a book, The Fourth Phase of Water . He states that water is not just assistive to all life, it is at the center of the cells’ functions. In his research he observed and compared water found in sources known to be healing-waters with water from polluted areas or municipal water. He found that the healing waters were structured. If you look at the structure in 2 dimensions it forms a hexagon, but in 3-dimensions it resembles a honeycomb. Since this discovery, he used his bio-engineering background and university resources to further study the type of water found inside of healthy cells vs. diseased cells. He found a similarity in the structure of the water from the healing-water sources and the structure of the water found in healthy cells. He coined this water “structured water”, but also for the scientific community calls it EZ water. “EZ” stands for “exclusion zone” which refers to the fact that this water does not allow pollutants, toxins or any unwanted particles within it, inside or outside of a cell, i.e., it excludes them.

Dr. Pollack states that water within a healthy cell has a significant negative charge, but in a diseased or dying cell the negative charge is much less. As cellular water loses its charge it loses its structure quickly, and this signals that the cell is dying. He also says that with negatively charged water it lines the water up in the right way for cells to be hydrated and is a fundamental attribute of all life. He theorizes that as the body strives for the highest negativity (negative charge within cells) it can get - it can reverse pathology (disease).

Ionized-water-longevity is a topic that has been around for a long time, but is somewhat suppressed in the US. It's understandably not backed-up by the drug companies, and so the medical community has not had monetary encouragement to study it seriously. Researchers, such as Alexis Carrell and Otto Warburg were the original pioneers of this century-old discovery. Most research has been done in Asia, but thanks to Dr. Pollack and others, the road has been paved for more and more doctors in the US to study this important topic. Among the studies that have been done, including  doctors-reviews-about-alkaline-ionized-water, the results are very impressive.

Drinking structured water, or ionized water, makes sense for health and could explain why the various, famous “healing waters” found in pockets around the world (all alkaline and negatively-charged) have worked for centuries to cure people, with no more than just the water. It also explains why drinking  alkaline ionized water has changed my life and the lives of my entire family to be far healthier ever since we purchased our first alkaline water machine back in the mid-nineties.