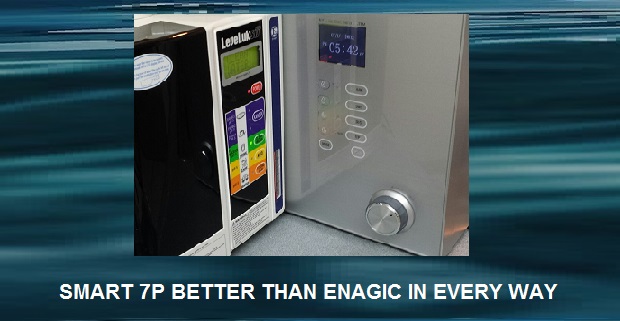 The answer is in the expert design. But, first I want to show a sneak-peek of the results from today's video.

The Enagic water ionizer's "Kangen Water 9.5" level of ionized water came out at 10 pH, using St. Louis tap water as its source. Many people think that because the machine says "Kangen Water 9.5" that it means the water has been tested by an instrument inside the machine that gives an accurate pH-level of the ionized water. This isn't the case, as all of my testing over the years has demonstrated.

The Smart 7P water ionizer's level-3 setting is the theoretical equivalent of the Kangen Water machine's 9.5 pH setting. The pH output of the Smart 7P was 9.8, which is closer to the expected 9.5 pH for level-3 than Kangen's output. [Note: The source water does make a difference in the results you will get when you test any water ionizer, and the ST. Louis tap water is a higher pH than usual.]

How is this possible? The three primary features of the Smart 7P water ionizer, that I think explain the reason why the Smart 7P is better than the Enagic SD501 in performance, are:

Price: The Smart brand water ionizers are priced extremely well, compared with the Enagic's multi-level brand's high-prices. For instance the awesome, new Smart 7P water ionizer retails for about half the price.

Flow-Control Knob: The Smart 7P water ionizer's flow-control knob makes it easy to hook your water ionizer directly up to your plumbing [bypassing the faucet] if you want to. The machine could be turned on/off simply by turning that little knob. This is a great feature for use with children or handicapped adults. The Smart 7P always gives alkaline water at your remembered setting, and you never experience an interruption in flow due to acid-wash cleaning cycles, so there's literally nothing you need to do other than turn that little knob.

No Sodium: The Smart Ionizer does not rely on adding sodium in order to get great ionization. The sodium used in Enagic machines are potentially harmful to the machine and to people drinking it.

Spring-Loaded Filters:  Easy to pop in/out filters adds to the ease of use that Water Ionizers are known for. Whereas, the Enagic-sd501 filter is more complicated to insert and there is no filter-counter.

Better ORP Over Time: While the two water ionizers give a similar ORP (antioxidants), over time the Smart 7P will maintain its performance while the Enagic will not. This is because the Smart 7P has continuous-cleaning vs. the inferior periodic acid-washes.

Water-ionizer-comparisons have always been very favorable, but now with this new Smart-water-ionizer they're even proving to be better than enagic-kangen-water. Read more about my water-ionizer-reviews.