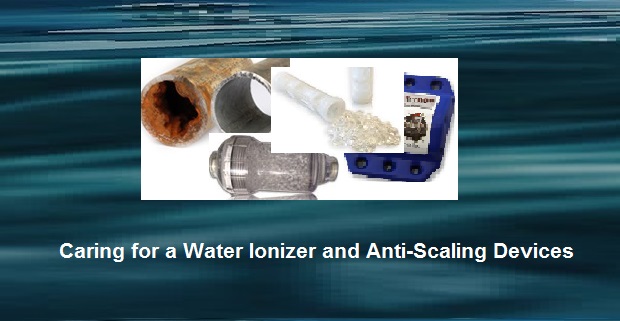 Why Should Every Water Ionizer Owner Know a Little About Anti-Scale Techniques and Devices?

Scale can be a problem for water ionizers in two ways.

2)The water lines within the water ionizer can get scaled up over time, and especially in hard-water areas the scale build-up can be so great that it would stop the flow of water through the water ionizer. Anti-scale devices can solve this problem [or at least slow it down].

Anti-scale devices and techniques have been developed over the years by water treatment companies and manufacturers. Three anti-scale techniques stand out as the most popular ones used and are listed here in the order of their effectiveness, ease of use and popularity [especially with regards to water ionizer care].

1) Anti-scale filter media [also called siliphos] which the calcium interacts with and slightly changes its physical crystalline structure to be more spherical [less pointy or sticky].

2) Electrical or magnetic techniques used to line-up the calcium magnetically within the water molecules so as to make them have less tendency to scale.

3) After the fact de-scaling techniques, such as soaking water lines or equipment parts in vinegar or citric acid solution. This is called a vinegar-wash or citric-acid wash.

One of the most widely used and recognized anti-scale devices is the use of the filter media, siliphos. Siliphos is a natural substance found in the milk thistle plant. Siliphos is 100% natural and completely healthy and non-toxic. It actually is used as a natural liver cleansing supplement. Here is a very recent video I produced which gives a thorough explanation of siliphos as it applies to water ionizer care. An abbreviated transcript of the video follows.

Of all the anti-scales techniques and devices available to water ionizers I think siliphos is the best. Siliphos crystals are now available through Alkaline Water Plus in bulk. Just a quarter cup of siliphos will refill 10 mineral baskets.

The material that make up these crystals comes from the milk thistle plant. It’s very natural and even used as a natural supplement to help detox the liver.

The crystals come in small pieces that usually will fit into the mineral basket of a water ionizer easily. However if they don’t fit into the basket they can be cut using a wire-cutter or pliers. [see video for demonstration]

How to Use Natural, Anti-Scale Siliphos Without a Mineral Port

If you don’t have a mineral port in your water ionizer, but want to use this all-natural, great anit-scale crystals,  you would need to get a tiny external filter called the EOS [Elimination of Scaling] Device. Once you have this device you can re-fill it every six months to two years [depending on need]. This type of anti-scale device will last years and is quite cost effective.