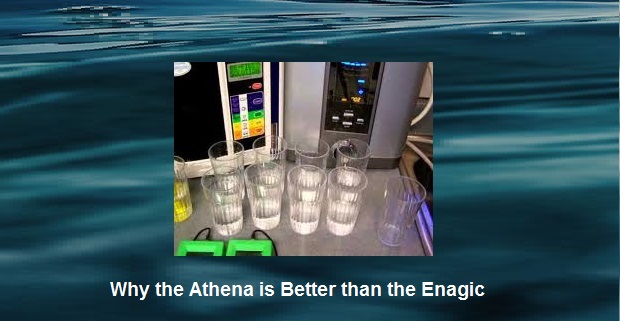 I’ve tested the Athena and the Enagic over and over throughout the years, and without a doubt I can confidently say that the Athena is better than the Enagic. Why? How is this even possible? I’ll explain all of the reasons later in this post, but first take a look at my latest testing. I took samples from the Enagic at both a fast and slow flow at all drinking levels. I also took samples from the Athena water ionizer. Here is the video and chart showing the results. The Athena’s ORP levels are much better than Enagic’s, even at Enagic’s slow-flow.

You can see in the chart, above, that at level 3 [Kangen Water 9.5], even though the pH of the Kangen water at the slow flow rate was higher than the Athena’s pH at that level, the ORP [antioxidants] were much higher in the Athena. Theoretically, as you raise the pH, during electrolysis, the strength/abundance of the ORP also increases.  To have fewer antioxidants with a higher pH means that that particular water ionizer is less efficient than the one it’s being compared with.

How is it Possible that the Athena is Better than the Enagic?

The Enagic is twice the cost, uses more power and has more plates than the Athena, so the perception is that “bigger” is “better”. This is only a perception, though, because the fact is that the Athena is better than the Enagic, otherwise it wouldn’t get better results so consistently year after year.

Here’s why: The efficiency of ionization is dependent on the platinum, which is on the plates, being able to directly touch the water during electrolysis. Platinum catalyzes electrolysis, and makes it possible for continuous-flow water ionizers [such as the water ionizers we have today] to even work at all. For the platinum to completely touch the water the plates must be completely free of all calcium. Now, this is impossible for the Enagic to achieve. Why? Because the Enagic water ionizers don’t have continuous-cleaning.

Periodic, automatic cleaning [acidic washes] is a fine way to clean the water cell of calcium, however it simply isn’t as good as continuous-cleaning. Unless you poured for 15 seconds then did an acidic wash for 15 seconds then repeated this all the time any water ionizer [large or small] would not be able to keep up with the results and efficiency of a continuous-cleaning water ionizer. Of course the scenario of constantly pouring/cleaning, described above, would be extremely inefficient too. You just couldn’t do it. However, because of their patented processes, the Athena, Vesta, Delphi, Melody and Smart water ionizers achieve fully efficient water ionization all the time.

The above tells you the main reason why the Athena is better than the Enagic, but in addition there are other features of the Athena that make it better in other ways [other than ionization efficiency and performance], such as price, construction, filtration, and warranty. I’ve devoted many different blog posts to assist you in understanding water ionizers. A complete summary of over 60 features compared between over 20 water ionizers can be found here: Water Ionizer Comparisons. We invite you to explore that page thoroughly before you buy your next water ionizer.