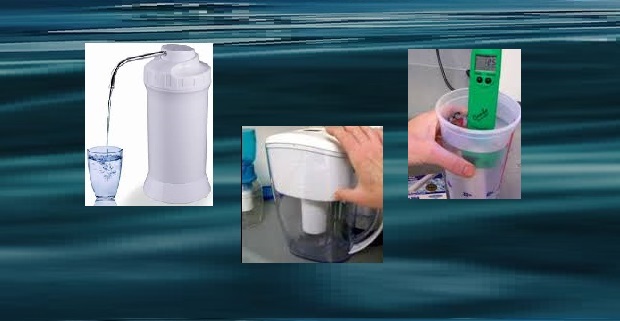 There are quite a few alkaline water ionizer filter devices that have sprung up which utilize a property of magnesium. Magnesium will, under the right conditions, ionize water. Sometimes these alkaline water filter machines or devices are called "natural ionizing filters". The term "naturally ionizing water filters" is an invented phrase which means there are alkaline minerals in the filters. There are also alkaline minerals in the earth's crust, so in nature water trickles through these on their way to the aquifer. This natural process is how acidic water (from rain), which is void of alkaline minerals, gets a higher pH (healthier for drinking).  The truth is, though, that ionized water produced by a water ionizer filter is not particularly more or less natural than the water produced by an electric water ionizer or hydrogen machine. So, the term "natural alkaline water" isn't really accurate. Some of these water ionizer filter devices are worthless, but some are pretty good. After lots of testing, I've put together some explanations to help you understand this type of equipment.

When you add magnesium to water in the presence of magnets it will spontaneously ionize the water.

All alkaline water ionizer filtering devices use this principle, along with whatever else they do. Here is a layout [from poorest to best results] of the variations of this:

Hydrogen sticks of all types are the most worthless of all of the alkaline water ionizer filter devices there are. First of all, they don't filter. Secondly, they require to sit in contact with the water for a long time to even make any changes to the water. The original Hydrogen Stick, developed by Dr. Hayashi, used this principle by placing magnetized ceramics inside of an outer solid shell [stick] of solid time-release magnesium. I tested the stick many, many times and it worked so poorly that I decided not to sell it on my site. The pH would raise a tiny bit and the ORP would reduce also a tiny bit after about two hours of soaking it and shaking it in the container of water. The poor ionizing results, combined with the high expense and complete lack of filtering the water, makes me not  want to recommend this device at all.

In addition, several copy-cat devices have sprung up, mostly from China, which use aluminum or stainless sticks filled with time-release magnesium balls and magnetized ceramics. These also work poorly and don’t filter. In addition, though, the added elemental magnesium metal in the water isn’t particularly good either. I don’t recommend any of the hydrogen sticks whatsoever, no matter how cheap. The Alkaline Ionizer Purifier Energizer is a type of alkaline water filtering device, but with some differences. It's hooked to your plumbing (either faucet with a diverter) or under the sink. It uses the water pressure, along with a bigger filter size and ceramic membrane, to achieve better filtration. Alkaline water ionizer filters [non-electric devices] that either go below the sink or sit on the counter-top are similar to the portable filter in using the principle of magnesium, described above. with these differences. They aren’t portable, as a pitcher is. They have a much larger filter, so will pour more alkaline ionized filtered water, and faster, than a pitcher. The results vary according to how much you pour at once, though, similar to the pitcher. For instance if you want the best results [about -400 ORP] you should pour only about a quart at a time. The particular device, pictured, is one I sell on my site. You can learn more about it on this page: Alkaline Ionizer Purifier Energizer

Here is a video showing my testing of the Alkaline Ionizer Purifier Energizer. See this report to learn more about the importance of molecular hydrogen to all of health.

How are Electric Water Ionizers Different?

Even though I do really like the pitcher and alkaline ionizer energizer, described above, in my opinion electric water ionizers are better for these reasons.

1) They will deliver an almost unlimited amount of ionized water.

2) They ionize all of the alkaline minerals in the water rather than just magnesium. Magnesium is fine, a good mineral to have and certainly ionizing it makes it more bio-available to your body. But the mineral calcium is needed in much more abundance in the body. The only device that will ionize calcium is an electric water ionizer.

4) If economy is what you want, you can even get excellent quality, Korean-made, water ionizers at probably less than you think. Here is a link to my water ionizer discounts page. We are here to help you get the best water ionizer for you, and at the best possible price.