How do the Water Ionizer Plates Compare with Each Other and Why Would You Compare Plates?

I stated in my last post: ultimately, the pH and ORP are the only real way you can judge how great your water ionizer is. But, what do the plates [platinum coated titanium electrodes] have to do with this?

There is a lot of wonder and even confusion about the differences among water ionizers in their design, size and manufacturing processes used in making their platinum/titanium electrode plates [which some people call the “heart” of every water ionizer]. Are they all safe? Yes — the ones I sell are all safe; I’ve checked them all out. Are they all as good as each other? No. Some are better, but it truly is hard to say which is better. I see the problem. Many people are claiming that a bigger plate size or more coatings and bakings of platinum are better. the bottom line is that you WILL ultimately see how good each company’s design is when you go to test them. I honestly believe all of the plate designs are good, because these water ionizers are giving great pH and ORP. Don’t believe scare tactics that the plates are coated with platinum then cut. This is not the case. They are all cut, slotted or meshed prior to coating with platinum. They all follow safety guidelines for water filtration and ionization in other words. So, don’t worry about that.

This blog post is devoted to describing the plate design for each of the major water ionizers. I have provided pictures wherever I had them available. If I get more pics in the future, I’ll add them then. I’m not claiming that any plate design is better, though, because they all look good, and all of these particular water ionizers get good pH and ORP for healthy, healing alkaline ionized water.

Nexus: Nexus plates are made of titanium and then electronically sprayed and coated in a special way that leaves no microscopic bubbles or gaps in the platinum coating. 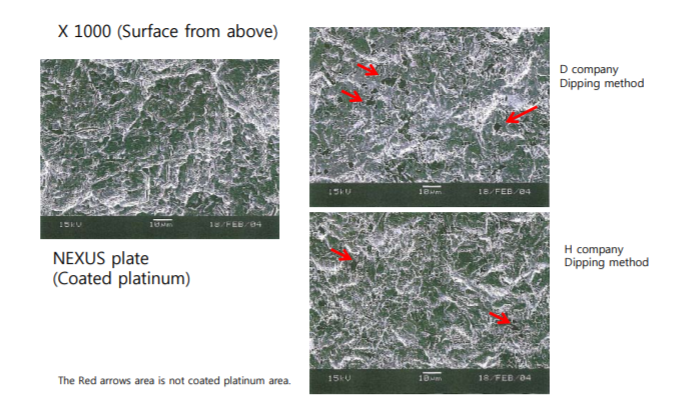 Chanson: Chanson plates are made of titanium and dipped twice and then sent to an oven for three separate times. They are each time nano plated, which means the platinum is broken down into smaller particles before plated. The end product is a far denser platinum coating than many other water ionizers. Chanson claims their plates hold up very well in hard water areas. Chanson also uses a process called fritting. Fritting creates a larger surface area for greater electrolysis. This is a picture of a microscopic section of a fritted Chanson electrode plate:

Life: Life water ionizers have a mesh plate on each end of the row of 5 solid plates [3″x5″]. Their mesh plates have a very large surface area, without compromising the quality and strength of the titanium. In other words they’re still solid enough to last far longer than I’m sure they even need to. They are dipped and baked twice for a superior coating of a minimum .25mm thickness. Life water ionizers now have a 20-year plate warranty. Life mesh plates are pictured below as the plate above the Tyent mesh plate.

Tyent: Tyent water ionizers have huge plates, possibly the largest plate size of all other water ionizers…even Enagic. The Tyent plate is pictured above under the Life mesh plate. The plates are placed at cross angles to each other to make a mesh as in the 2nd figure. Tyent’s electrode plates are slotted, then placed in such a way that a cross mesh is created when all plates are together in the water cell. A membrane is placed between each plate for proper spacing and to ensure that the two plates do not touch for superior ionization. The titanium slotted plates are dipped and baked twice for a superior coating. Tyent water ionizers now have a 20-year plate warranty.

Jupiter: The Athena has 5 mesh plates [3″x5″], and the Melody has 5 solid plates [3″x5″] with padding placed between for superior electrolysis. The plates are electro-coated by little machine-bots spraying the plates with electronically programmed-in peaks and valleys of platinum on the pre-cut mesh or solid plates prior to baking. This gives an even greater surface area and better electrolysis than what is possible with dipping. 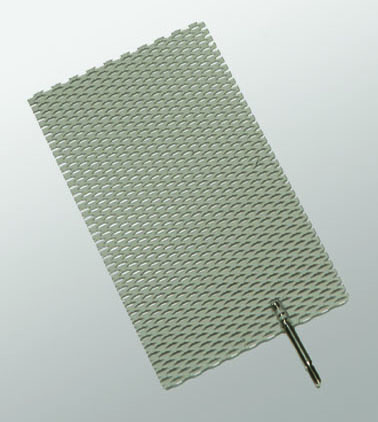 KYK: KYK water ionizers are made with oversized cutting edge slotted titanium electrode plates which are dipped and baked for a superior coating. 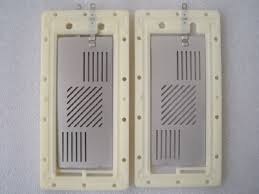 Enagic: Enagic representatives boast of having the largest plate size of all. It seems they are mistaken, however… they do have very large plates. The plates are coated and baked properly with platinum coating. They claim the smooth plating process causes less hard water build-up of calcium attaching to the plates. That may or may not be the case, but if you get an Ionizer Armor  you shouldn’t have this problem anyway. I don’t have a pic of the plates, but am picturing the large water cell here: 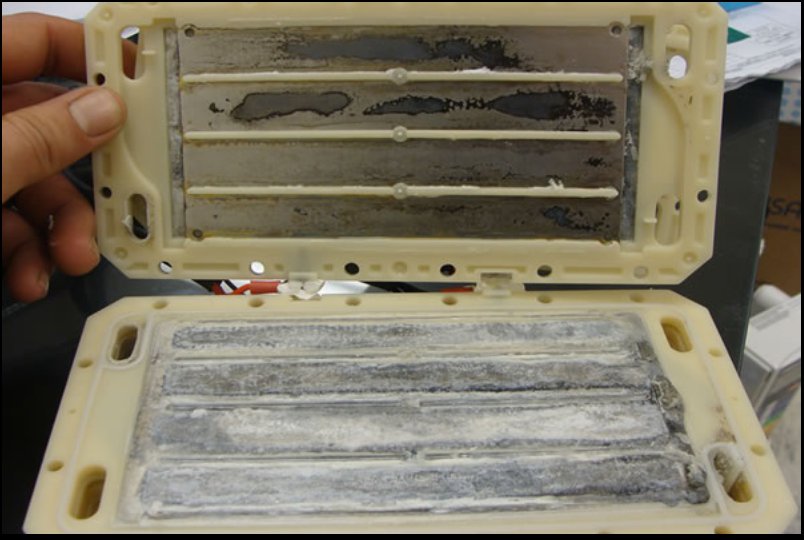 Note: The Enagic's plates are large, but are subject to both calcification and corrosion damage due to use of sodium solution during electrolysis.