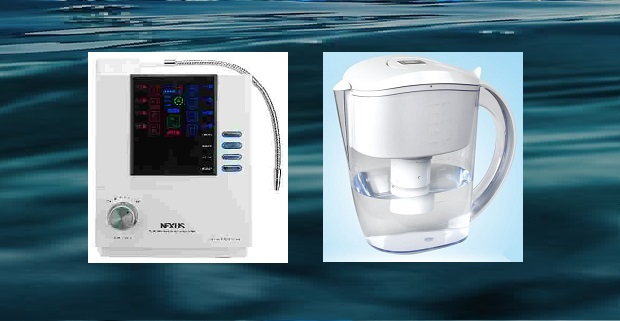 There are two types of systems which will ionize water. One is electric, a water ionizer machine, which involves electrolysis of water. The other filters and ionizes the water using minerals [mainly magnesium, tourmaline, zeolite, etc.] and usually some sort of magnets [usually magnetized ceramics] to lightly ionize. All portable water ionizers, such as the Alkaline-Plus Pitcher, are among this second group of water-ionizer-devices.

The sellers of both these types of water ionization systems advertise “conclusive” information about how their system is better, more healthy, more natural, etc. than the other type of system. In this post I will give you the data [without the hype] so you can know what the similarities and differences between these systems and choose the right one for you. I actually recommend you get both kinds of systems and will explain why, below. The first true piece of information is that:

I Sell Both Types of Water Ionization Devices, Including Non-Electric-Water-Ionizers, and the Ones that I Sell are Good!

Nott all water ionizer systems are equal, because it depends on the manufacturer, design, materials and workmanship that are used to make the particular water ionizer. This is why I test and thoroughly study them all before I decide to sell them. The two non-electric-water-ionizers that I like, I sell: the Alkaline Plus PH Pitcher and the Alkaline Ionizer Purifier Energizer (formerly called Alkastream). I have long since realized that the water ionizer industry [not unlike anything else these days] is bombarded with hype.The group that used to sell the Alkastream gave out a lot of hype about how much more "natural" your water would be ionized with this device over the electric water ionizers. What I found, after thorough research and testing, was that the Alkastream [now called the Alkaline Ionizer Purifier Energizer] is good, but not better than electric water ionizers. Read on to find out why. Also, keep in mind I sell both types of water ionizer devices, so I do not have a personal benefit to "sway" you one way or the other.

A water ionizer uses electricity to split the water clusters and produce a variety of strengths of ionized water. It is suggested to start drinking at the lower levels of alkaline ionized water and then slowly work your way up to about 9.5 or 10 pH water.

For daily use I prefer, and suggest, an electric water ionizer over a portable or mineral-based water ionizer system. With an electric ionizer it puts a negative charge on all of the healthy minerals which are naturally in the water [such as calcium, potassium and sodium as well as magnesium]. The fact of a negative charge makes these healthy minerals more bio-available, which is good, because your body’s biggest need is calcium [far more than the other minerals] and calcium is usually dissolved in abundance in water.

A water ionizer is capable of not only stronger ionization, but more complete ionization as well as micro-clustering. It will also usually be able to give you as much ionized water as you want, at whatever level you want and whenever you want.

Within the category of electric water ionizers, there is the variability of more and less effective results. When a water ionizer company makes a claim to be better, because of whatever reason, I have learned to be suspicious of their claims. My protocols for establishing the “best” ionization are specific. I test everything and thoroughly research it too.

1) I test each level of that water ionizer’s capabilities. If the ionizer is programmable, then I program it at various settings and then set it to the best I’ve found for my water.

3) To compare drinking-levels of alkaline ionized water I will pour a variety of pH-levels and determine for each pH-level what the ORP [antioxidant-levels] are. The way I judge the “best” is to determine the ionizer which gives the highest amount of antioxidants for the pH-levels one would drink at.

4) When I am reporting on the “best water ionizer” I usually will list out several qualities and give the ionizers which fit into my definition of “best” for each category. I have not to this date found a water ionizer that was the best in every area, and because of such wide variations in customers’ preferences there may not ever be a single “best” water ionizer.

A few words of warning [be aware of the most common tricks to lure your business]:

When you are trying to find the best water ionizer machine [electric] the number and size of plates or watts doesn’t necessarily indicate a better water ionizer at all.

Winning “water ionizer of the year” awards year after year just means that the company is slick in their advertising.

Being represented on a water ionizer comparison chart as “best” is possibly an advertising trick as well.

Being endorsed by a famous movie star or athlete is also a slick advertising move, but not indicative of quality in particular. Celebrities are paid money for their endorsements, and an endorsement for the goodness of one water ionizer shouldn’t be counted as an un-endorsement for another.

A water ionizer being represented on a site as “not good” is also often an advertising trick done by a competitor [usually cloaked as an “independent review site” whose site-owner’s identity is not divulged so as not to be able to be sued].

Another widespread trick is to imply that their water ionizer is the only one that uses safe plastics or safe plates [electrodes], when they are not by any means the only ones safe for that particular feature. This is a sly fear-tactic strategy and is unusually effective with many people.

Out of all of the portable or mineral-based water ionizer pitchers or other filter systems, I have only found a few that work well. Theoretically these should all work fairly the same, because they often say the same things about themselves, but I have not found this to be the case. Some are pretty reliably good, such as the AlkaStream and the WellBlue pitcher, however even so they are not preferable over an electric water ionizer in my opinion. The reason I don’t prefer them is that the only mineral that is able to be ionized spontaneously [without electricity] is magnesium. Most mineral-based water ionizer systems rely on the principal of magnesium’s ability to do this. They will also use other minerals, such as zeolite and tourmaline, which contribute to light ionization as well. I think it is a great way to become introduced to ionized water and to use for traveling, but I feel I would be remiss if I said or implied that ionizing only magnesium was as good as the capabilities of an electric water ionizer to ionize all of the healthy minerals [including calcium, which we need in abundance daily].

Some of the hype I’ve seen about mineral-based water ionizer filter systems is the claim that they are more “natural”. This is just an advertising trick to entice you away from an electric water ionizer and into buying their “more natural” system. The facts are that it’s not particularly more or less “natural” …it’s just a different system.

After about 20 years of drinking alkaline ionized water, I can say with conviction that the very best thing I could give to myself or a loved one is a WATER IONIZER! Give yourself and your family the gift of health this year! See my testimonial.