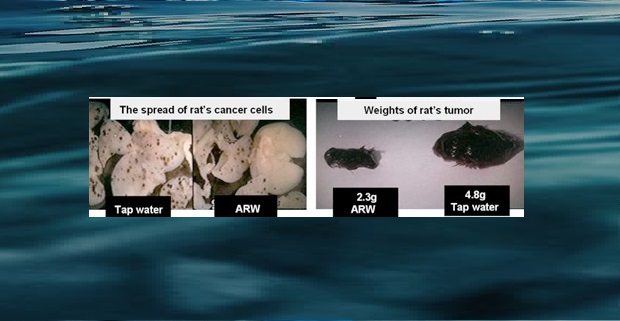 Ionized Water was Used in Cancer Experiments With Mice

I just finished doing an English narration for an awesome Japanese experiment video, and I’ll share that with you today. It’s only about 6 minutes long — you really should watch all of it and share it with your friends too!

This series of Japanese experiments with mice offers proof that ionized water has a positive affect on health in every way tested. Despite the large quantity and variety of tests being done, the mice in the group of ionized water drinkers did far better than the general-water-drinking mice in every test. The tests include diabetes blood-sugar levels, fat [obesity] levels, LDL, bad=cholesterol, levels and active-oxygen [free-radical] levels, and the condition of lungs, liver and kidneys. Also, the anti-cancer effect of alkaline ionized water was thoroughly put to the test, and not only do these experiments prove that cancer growth is suppressed by drinking ionized water, but also the organs in the body that undergo stress during severe illness are in far better shape in the mice that drank alkaline ionized water! Here’s the video:

One thing I can really thank the Japanese for is their honesty and integrity in medical experimentation. As a culture, the Japanese are of better health than Americans for the reason that they take such a holistic approach to health-care. I don’t recall ever seeing or even reading about such a thorough and complete series of tests from anywhere else.

The kind of ionized water used to feed the mice or rats in these experiments was the same kind used in the  Alkaline Plus PH Pitcher. It utilizes the principle developed by Dr. Hayashi, that if magnesium is added to water in the presence of magnetized ceramics, the water will spontaneously and lightly ionize [giving a pH of about 8.5-9.5 and antioxidant-levels of about -100 to -300 ORP.

It was experiments, like the Japanese ones done here, which lead the way for water ionizers to start becoming popular in the US and the world. It is literally impossible to dispute the results of these experiments, because they were so thorough. And, for those who would want to dispute them, i.e., drug companies, not once have I seen a single one do clear-cut experiments such as these. They really are exemplary.

Again, thank you to the Japanese scientists and doctors for doing such a fine job with this series of experiments using alkaline ionized water!

Read more about the Benefits of Drinking Ionized Water.