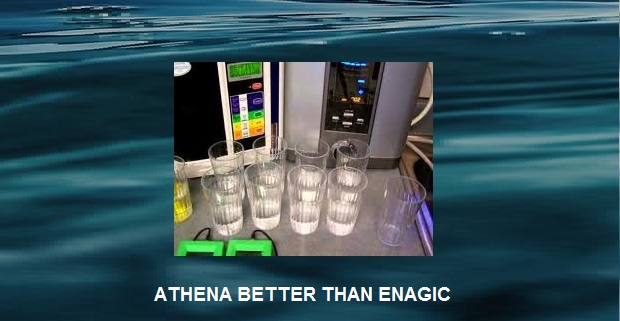 I keep on testing and comparing new water ionizers with more plates and higher watts than the Athena water ionizer, but I can honestly say that the Jupiter Athena has not been surpassed in all these years! This is actually great news, because it means that a solid, sturdy, tried & true water ionizer …not to mention affordable, can be safely purchased by anyone looking for the best water ionizer! Here’s the product link:

I invite you to check out the large number of blog posts, videos and water ionizer comparisons that I’ve done over the years. Here are a few.

I also invite you to check me out. I have been drinking ionized water for far too long to be tricked by people using gimmicks to try to make me think their water ionizer is the only or best one.

About Alkaline Water Plus

About Me and My Testimonial

Why Do I Say the Athena Water Ionizer is Great?

For instance, price. The Athena is mid-priced, but some customers are looking to pay half that or less for a water ionizer. There is no problem with that and I sell water ionizers, actually, that are 1/3 the price of the Athena water ionizer which are excellent, give a good pH range, give good filtration, give high ORP levels, are constructed of high-quality materials, have lifetime warranties and I would certainly use with my family and be HAPPY with.

Another feature of the Athena water ionizer that is excellent, is the fact of continuous-cleaning. Calcium scaling [even the slightest amount, such as the thinnest film] can cause the water ionizer to reduce it’s ability to ionize efficiently. Platinum is necessary to touch the h2o [water] in order to catalyze electrolysis [speed up ionization]. The fact of the platinum making direct contact with water is more important than plate size and watts in creating the two streams of water [alkaline and acidic] quickly. If you had all the time in the world and spent 20 minutes percolating the water [which used to be the method used to ionize water 20 years ago] then you wouldn’t need to be as concerned about calcium scaling/filming on the plates. Most water ionizers don’t have continuous-cleaning, a few do and I sell those happily, but I have yet to find a better water ionizer for the function of continuous-cleaning than the Athena Water Ionizer.

A feature of all water ionizers is that they will give you a pH range from high alkaline down to low acidic. The uses of these different pH-levels are varied: cleaning and emulsifying oil/grease; drinking; watering plants; using as beauty-water for skin and hair; and disinfecting. The Athena water ionizer has a great pH range, and give a better pH range than most water ionizers, but honestly some water ionizers will give better, such as the Vesta. One would have to decide about this.

Here’s another water ionizer comparison feature that the Athena is pretty-much best in: filtration. The Athena has two filter ports. They are easy to use pop-in and out filters too. There are many filters that can be used in the Jupiter Athena water ionizer, but it is significant to say that the Athena can use the new, patented, UltraWater filters. I have never seen better results reported from water filters of any sort [even reverse osmosis] than the results of the water lab reports for the UltraWater filters! Dozens of pharmaceuticals were even added to the source water, along with arsenic and chromium-6 and these UltraWater filters removed on average 99.999% of everything harmful. Yet, the good minerals, such as calcium, magnesium and potassium were unchanged.

I have written a lot, and will in the future too, about the Athena water ionizer. Suffice it to say, I love it. I’m confident that most people will also feel this way. Give me a call and mention this post for the best deal we can offer, okay?