I purchased the Trustlex Hydrogen tester, because I saw researchers were using it. It's Japanese-made especially for use in hospitals and research facilities, so it's a little pricey, but it's my favorite testing tool at this point. I really love it. It works very fast and is quite accurate for showing the dissolved Hydrogen. I have several ORP meters I use regularly as well, but ORP meters are a bit more difficult to use, and they take longer to "settle down" to a number (measurement).

These days I usually test both ORP and H2, but if I had to choose only one, after using both for so long I would pick the Hydrogen meter as a far better, easier, more scientific, tool.

When and Why Do I Test?

I test my water periodically to make sure my water ionizer (or pH ionizing pitcher; or hydrogen machine) is still functioning well after several months of use. I will sometimes test my water after it's been sitting in a cup or bottle for a fairly long time, just to see if it still contains a good amount of free-hydrogen. Because it's such a quick and easy machine to use I can get the information I want in just literally a couple of seconds.

Free-Hydrogen is also known as H2 or "Molecular Hydrogen". Whether it truly is a better antioxidant is probably going to take several more years of research to determine, but for now at least it is recognized that the antioxidants in ionized water are significantly beneficial to one's health.

Some water ionizers and ionizing devices will produce great ORP, which is your combined antioxidants, but far less H2 antioxidants than others. An example would be the X-Blue. I typically will see the ORP go up over -700 in the X-Blue, but when testing it for H2 I usually can't get over .5 ppm (parts per million) of results (dissolved hydrogen in the water).

Note: Medical quality of dissolved Hydrogen is from .5 to 1.5 ppm. Whereas when I test the Athena (the water ionizer machine I use at home) I can expect to get close to the same ORP, but over 1.5 ppm of molecular hydrogen.

I've done comparisons of molecular hydrogen machines in other posts that you may want to read for more information.

There are plenty of uses for this water. I prefer drinking the high pH water, but I'll sometimes drink hydrogen water from a hydrogen water machine for variety. Also sometimes I will put it on my skin.

I can usually expect great ORP and Hydrogen levels from the H2 water ionizers. the Smart, and the Athena. 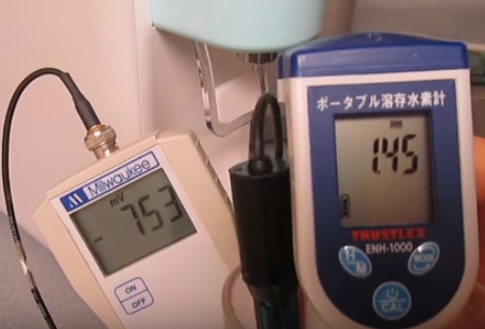