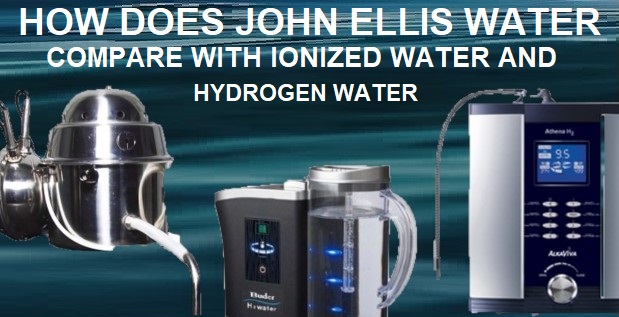 I just posted a new product on my website, called the John Ellis Living Water Machine. I've also been testing and comparing the John Ellis machine to ionized water and to hydrogen water for about a month now. So, I plan to share what I've learned in this post.

You should definitely see the actual product page for a full, detailed, account of the John Ellis Living Water Machine. It is a unique machine from top to bottom, and it has attracted a fair amount of attention over the years for being able to produce healing water. At the request of a few customers, I became aware of and got interested in the John Ellis machine. I decided to buy one to see how John Ellis water compared with ionized water and hydrogen water.

The reason the hydrogen bond angle is significant is that when water has a greater bond angle (between the two hydrogens) it is theorized to be able to give more energy to the body once it's inside the body. It is difficult to know exactly what happens inside the body with these various waters (John Ellis water, hydrogen water, ionized water, distilled water, etc.), and I've come across many theories about these waters over the years. I personally feel that the proof of any theory should be in the "pudding". In other words, if there are quite a few testimonial-style results reported, along with other scientific evidence, I will tend to believe there is at least something to it. That's when I will try it, and trying it (for me) is my final answer on whether I feel a theory of something being good for the body, or "healing" to the body, is correct or not.

I don't know if John Ellis water is specifically beneficial to my body or not. I think it is, when I use it as source water in one of my hydrogen water machines. In any event, I am impressed with the several of the stories I have heard about the John Ellis water.

Other than the claims of being healing water, and the fact of being H2O (i.e., water) that's about all of the similarities that I have found to ionized water or hydrogen water. For instance, the pH of John Ellis distilled water is very acidic: the same as the pH of other distilled water: about 4 (very acidic). There is no free-hydrogen in John Ellis water (it tests "zero" for antioxidants of any kind). Theoretically, John Ellis water will help your body create free-hydrogen antioxidants within the body, but that is strictly theory, and can't be measured. Maybe it does, but I just don't know.

I'm not aware of any machine I can buy that actually measures the hydrogen bond angle of water. John Ellis personally didn't test the new bond angle, but it has been tested by nuclear scientists and governmental scientists and verified as having a new bond angle. This water was initially tested by the government after seeing it worked to clean up radioactive wastes. They used the most advanced tunneling scanning electron microscopes on the planet. (See more about this on the product page.) The equipment used is so sophisticated that it simply isn't available to 99.9999% of the population.

One could theorize that alkaline ionized water also has an increased bond angle. After all, the electrolysis process shoots electricity through the water in multiple spurts as it passes through the water cell. This isn't a theory that can be directly proven (at least not now). It is way too impossible to access those multi-million-dollar microscopes used in testing the Ellis water. But the following is a little proof that alkaline ionized water has had a bond angle change.

About ten years ago a sample of ionized water was sent to be tested by Dr. Emoto in Japan, who was studying hexagonal water at the time. Dr. Emoto had discovered hexagonal water made beautiful crystals when flash-frozen. He was studying hexagonal water because it was the latest way at the time of isolating the properties of healing waters. Dr. Emoto found the sample of the ionized water created a perfect crystal, confirming that indeed it was hexagonal, and he further said it was "Crystal Perfection" on the picture he sent back to the company who sent the sample. 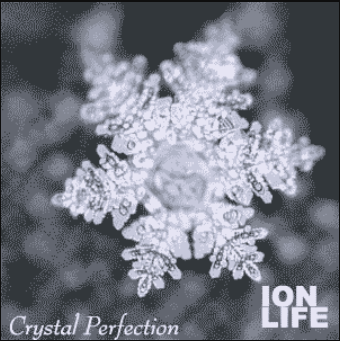 Ionized water has also been tested for energy resonance and has been found to greatly increase the energy field around the body. As a matter of fact, when combined with John Ellis water this field has been shown to increase exponentially. This video is available on John Ellis's site. I'm not sure how energy resonance testing proves a health benefit, but it is mentioned here, because it is another test that shows a unique quality that both of these waters share in common that might explain something about why these waters are resulting in so many healing benefits being reported.

There are definite properties of ionized water that can be measured by anyone. For instance, anyone can measure and see that the pH of the water is raised at the alkaline pole of a water ionizer and the at the acidic pole one can see there is a lower pH. Also, there is a distinct and measurable ORP (oxidation reduction potential) improvement when you ionize the water.

Many people can also sense the internal benefits of the water. I can. I feel a sense of increased mental clarity and overall physical wellness almost instantly after drinking a bottle of ionized water.

Some water ionizers also test quite high in molecular hydrogen (a special form of hydrogen gas which is proven in many clinical trials to be therapeutic and act as a very powerful antioxidant).

Ionized water is also very easy to use. Normally all one does is hook it up to one's water supply (either the faucet or direct plumbed), then turn a knob every time you want ionized water.

Another thing about water ionizers that makes me like them better than the other "healing-water devices" I'm describing in this post is the fact that they usually come with filters in them (which vary from "good" to "best in the world" levels of filtration).

The water ionizer industry is very competitive and this is super good for the consumer, because the average water ionizer warranty is some form of "limited lifetime". So, into the future a consumer can expect lots of support if anything goes wrong with their water ionizer.

I have been drinking ionized water for over 25 years, and have personal knowledge of the healing benefits of it.

Hydrogen water machines are fairly new, and there is no way they are anywhere close to offering warranties like one can get with a water ionizer. They are typically less costly, upfront, than a water ionizer. They don't split or micro-cluster the water, so do not change the pH of the water, however they do increase the Oxidation Reduction Potential (negative-ORP) of the water and produce measurable levels of molecular hydrogen.