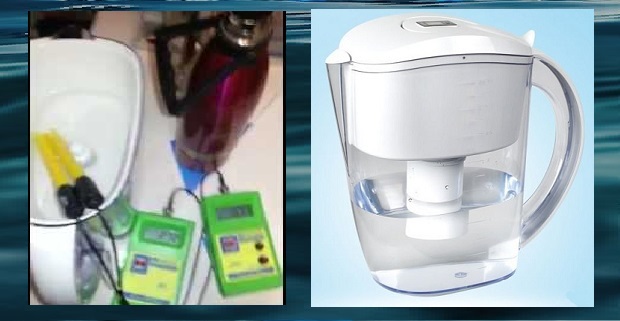 The Alkaline Plus Portable Ionizer Pitcher is a Fantastic Travel Companion!

I took the Alkaline Plus Portable Water Ionizer Pitcher by Well Blue with me on an 8-day trip earlier this month, which I was mostly on a cruise ship. With very little time or space that the WellBlue pitcher took up it really made things perfect, both on the cruise and in the lengthy time spent in airports! I was very satisfied with the taste of the water as well as the health benefits of getting both 9 pH drinking water and -288 ORP [antioxidant levels] from the wellblue-water-ionizer-pitcher. My body felt healthy and hydrated the whole trip, which has not always been the case with long trips.

Here is a video I took testing the cruise ship water [which was reverse osmosis acidic water] and then dropping the probes down into the lower bin of the alkaline ionizer pitcher. To my great pleasure the results were not only alkaline, but also antioxidant-rich. Watch the video and see the results also in a chart, below.

The Alkaline Plus PH Pitcher by WellBlue is the best ionizer pH pitcher we’ve found!

I’ve tested this pitcher for the past several months, and it is still testing great after about 60 or so filtrations. It’s supposed to last for 3 months of use, and I’m doing my due-diligence to see if that is a reasonable expectation. Right now I’ll say that it’s at least reasonable to expect it to last for two months of use [about 60 gallons]. I have found it works best if you limit it to 1-2 gallons per day, and suggest if you want to filter more than that, you should buy two of them!

What I have found is that when you filter too much in a day, in other words if you use it constantly…every hour filtering a full pitcher, then it tends to dilute, and the results are lowered.

The Alkaline Plus Pitcher’s filter itself needs to rest between filtrations.

If you filter about 1.5 quarts/liters then wait 2-3 hours then filter again, that will assure you that you are getting the best results. Therefore, I do not suggest sharing one pitcher between more than two people. However, here’s what I do suggest: use two pitchers alternately with each other, so that more time between filtrations can be achieved.

Below is my introductory demo video showing that the Well-Blue water ionizer pitcher is able to change my 9.4 pH, St. Louis water to 10.6 pH and the ORP was better than -500. Depending on how much use it gets in the day I’ve seen the ORP range from about -200 to -550 ORP. That’s why I say get 2 pitchers [to give the other one a break between pourings so the ionization doesn’t fall off]. For additional info: after two months of testing the same filter that was shown in this video it was still able to get 10.4 pH and -300 ORP in St. Louis water.

I’ve never seen a portable water ionizer pitcher get these results…even when NEW!

Best-portable-water-ionizer: I have found that this alkaline ionizer pitcher is better than the competition [such as H2go, Ty-Go, and Alkapod, Nano Alkaline Energy Flask, Alkaline Nano Flask, Alkaline Nano Portable Energy Cup, Suniwater, AOK,  etc.]. I’ve also tested it against various other portable pH pitchers and devices, such as the hydrogen stick, and proven beyond any shadow of a doubt how useless the hydrogen stick is. I have for years seen how much better the H2Go did in comparison to the Hydrogen Stick, now with this Alkaline Plus Pitcher, formerly known as the Well-Blue pitcher, I’d say the Well-Blue ionizing pitcher is four times better than the H2Go [in both durability of the filter and amount of filtration for each use]. It also gets great reviews! portable-water-ionizer-reviews [see reviews at the bottom of the product page]

If the Alkaline Plus Water Ionizer Pitcher by WellBlue  is so Great, Why do You need a Regular Water Ionizer?

I’ve Tested It! Here’s What the Portable PH  Alkaline Ionizing Pitcher by WellBlue Does:

Visit the rest our alkaline-water-plus website to learn about all of the benefits of drinking alkaline ionized water!

Taking the Alkaline Plus Pitcher on the cruise with me inspired me to develop a new product for travelers. This is the pH pitcher without the pitcher. In other words you get the bin and filter [which is compact and all you really need for traveling] at a greatly reduced price. Alkaline Plus Travel Kit

Note: Portable-water-ionizers are not continuous-flow water ionization devices. The time-release magnesium inside the filter runs out, and needs to have about 30-60 minutes wait-time for the outer-layer of magnesium to be softened-up.