Posted by Alkaline Water Plus on December 12, 2018 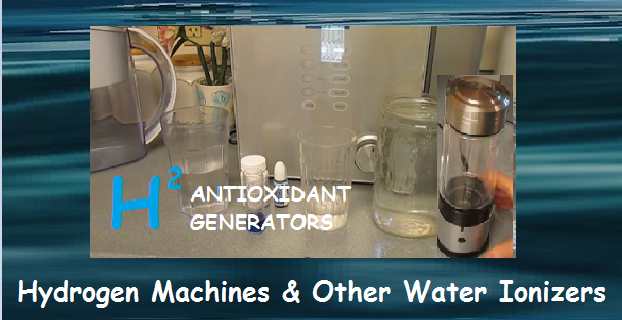 What is So Good about Hydrogen Machines and Water Ionizers?

Water ionizers, hydrogen water generators, and alkaline water filters are vital health tools that everyone should know about. Water ionizers have proven themselves for 40 years to be of great benefit to health and longevity. Hydrogen machines are newer, but even in the 10 years since they were first developed, the medical science is showing success with hundreds of clinical trials so far. Water ionizers and hydrogen machines aren't just water filtration devices. They are, but they also pump molecular hydrogen (H 2 Hydrogen Antioxidants) into your drinking water. I am amazed at what hospital research has shown for the benefits of Molecular Hydrogen and ionized water.

Medical research on ionized water has been impressive. The fact is, that in trial after trial people have been shown to have  benefits from molecular hydrogen and ionized water. As a member of the baby-boomer generation (older than 60) I have not experienced the various declines in health that many of my peers have.  I simply don't get sick or diseased.

There are four different types of machines which produce hydrogen water: water ionizers, hydrogen water machines, ionizing filters, and hydrogen gas machines. I have use for all four kinds of molecular hydrogen machines, because each is very unique and can do things the others can't do. My favorite is the electric water ionizer. But I do use all of the other types of molecular hydrogen generators. They each have their own strengths and uses that make them each very valuable to own. You can see the full comparisons of each type of device below the video.

I have been drinking molecular hydrogen enriched water (ionized water) for years, and have observed life-changing effects for myself and entire extended family. And, for the past 8 months have had the opportunity to use a hydrogen gas breathing machine as well.

The hydrogen gas breathing machine, has specific advantages, like being able to add hydrogen gas (antioxidants) to any liquid of your choice.

I personally prefer drinking hydrogen rich water, where the H2 (hydrogen antioxidants) are dissolved in water. Drinking ionized water like this gives me a better overall healthy feeling, plus it is less time-consuming.

Here is a video where the top molecular hydrogen researcher, Dr. Ohta, is being interviewed by Tyler Lebaron of the Molecular Hydrogen Foundation. They are discussing the two ways to consume molecular hydrogen. Dr. Ohta, the senior researcher, has found in his trials over the past 15 years that consuming molecular hydrogen enriched water has greater, long-lasting, benefits. For instance, after one is finished consuming the hydrogen enriched water the benefits go on for hours or even days inside the body. He gives his theories as to why this is, but really it is still a mystery as to why molecular hydrogen is so effective in the first place. We're at the stage in research where we can observe the beneficial effects of molecular hydrogen; we can observe the fact that it is a selective antioxidant and won't harm the "good" radicals, that are actually useful in the body, it only destroys the deadly free-radicals. We can also observethat it is very powerful, far more so than ordinary antioxidants, and can ameliorate or even prevent over 170 diseases observed so far, but with all that we can't exactly explain why.

Electric, continuous-flow  water ionizers are by far my favorite, for going on 25 years now. They hook up to your sink or can be installed directly to your water line. You can pour gallon after gallon of filtered and ionized water all day long, instantly, and provide water for your entire family very efficiently. They split ordinary tap water into two streams (acidic and alkaline water). By splitting the water clusters they remove acidic minerals, such as Fluoride, which go into the acidic stream. The water ionizers I sell also filter impurities (chemicals, heavy metals, dissinfectants, pharmaceuticals, fertilizers, pesticides, etc.) quite well before even entering the ionizing chamber. This is explained in more depth on my  Benefits of Ionized Water page.

Alkaline ionized water contains powerful antioxidants (H 2 molecular hydrogen). The concentration of antioxidants in ionized water depends on the machine itself, the source water, the flow-rate and the setting one selects to ionize water with.

The perception is that  electric water ionizers are more expensive than alkaline pitchers or hydrogen water generators. Actually this is not the case when you do the math. When you consider the life expectancy of the water ionizer (10 years or so) and the fact that it continuously pours ionized water on demand (to satisfy your whole family's needs) it amounts to the rate of about 50 cents per gallon! The other money-saving factor is doctor bills (lack of). In my case, with a family of 7, we cut out hundreds of dollars per year in doctor bills after we all started to drink ionized water. Electric water ionizers are simply better at pumping beneficial molecular hydrogen antioxidants into the water than any other device. This is why my water machine of choice is the electric water ionizer.

I do many comparison tests of water ionizers before I evaluate them. Here's a recent video of me testing two of the most powerful electric water ionizers (i.e., they pump lots of molecular hydrogen into the water).

Video Results in Order of Performance:

Electric water ionizers are the best for getting healthy, alkaline ionized water. They aren't very portable, because they need to hook up to both a water supply and electric, but even so I am known to travel with my water ionizer when it's possible (i.e., if I'm driving vs flying) just to make sure I have the very best water.

The alkaline water ionizer machines I sell are very durable and well-made. They are so well made that one can expect to have them for as long as one would own a car or a refrigerator (maybe even longer). The warranties are quite good.

Electric water ionizers produce a continuous flow of ionized water at varying levels, and so are very convenient-to-use. Economically speaking, even a large family can have unlimited amounts of ionized alkaline water, acidic water for beauty and plants, and also very well filtered water (water for all occasions) for just pennies a day.

A water ionizer is described on the Benefits of Alkaline Ionized Water page. A typical ionizer both alkalizes and ionizes the water, and it often pumps lots of hydrogen antioxidants into the water. The amount of molecular hydrogen pumped into the water depends on the machine itself, level you select on the machine, and water flow. So it is a hydrogen machine, but is not ONLY that.

A hydrogen water machine doesn't alkalize the water; split it into streams; or have a variety of settings; and most don't filter the water. It only has one setting. Some people don't want to or need to alkalize, and so prefer the hydrogen machine. At my age and with my body, diet, and lifestyle, I need to alkalize, so the machine I like best, myself, is the electric water ionizer. But I like the hydrogen machines (good quality ones which use the SPE-PEM membranes), because they produce so many antioxidants.

Molecular hydrogen machines are very varied in quality and price. Some are more cheaply made than others, and over the years I have learned to stay away from the cheaper hydrogen machines which don't use the DuPont SPE/PEM membrane.

The portable molecular hydrogen machine I like the best so far is the  High-Rich Machine. The High-Rich is small, portable and less expensive than most other hydrogen machines, but it has the DuPont membrane and so the quality is very high. A particular benefit of the High-Rich Machine is that it will work to pump in a tremendous amount of hydrogen-gas (molecular hydrogen antioxidants) into whatever water you put into it. You can use acidic, neutral, distilled or alkaline source water and the machine will pump hydrogen antioxidants into it. Its special membrane also pumps out chlorine, nitrogen and oxygen. Here's a recent video about the High-Rich Machine - Hydrogen Water Generator.

I make sure to take my hydrogen machine with me whenever I travel. It not only makes any water taste better, but it keeps me healthy while traveling with all the molecular hydrogen it makes available for my body. It's an easy machine to use, but if you are trying to share the water with too many people you may want to buy a few hydrogen machines, because it only makes 8 oz. of ionized water at a time and takes 5-7 minutes to run its cycle.

The  non-electronic filtering devices, in particular the Alkaline Plus Pitcher or the continuous-flow machines, such as the Alkaline Ionizer Purifier Energizer water system will filter the water and ionize it for a lot less initial money spent than an electric water ionizer or hydrogen machine. Non-electric water ionizers work to ionize water by adding magnesium to water that has had some of the hardness removed by a special resin. Magnesium is capable of splitting water clusters and creating molecular hydrogen (antioxidants) in the process. The Alkaline Plus pitcher and other non-electric water ionization and filtration processors ionize weakly as compared to hydrogen machines and electric water ionizers, but they do ionize and many, many, many people have raved about the benefits of drinking this water (plus the taste is very good too). When I'm traveling I make sure to bring a non-electric alkaline ionizing filter with me.

Here I'm doing a demonstration of several different types of these non-electric methods of ionizing water and pumping molecular hydrogen into the water with no electronics involved.

Just as stated in the article, above, you can see the differences in capabilities of the various water ionizers and hydrogen machines to ionize water and pump molecular hydrogen into the water.

Hydrogen gas generators are great to use at any time when you are relaxing. They pump high levels of anti-oxidants into a thin, plastic tube (usually called a cannula), which you would usually just breathe in while sitting or reclining. Breathing in hydrogen gas is a very valid way of boosting your body's level of molecular hydrogen antioxidants.

Hydrogen gas generators do all their work in the clean environment, inside the machine, and then they pump out pure H2-antioxidant-gas into the hose-line you attach to the machine. Because of this they have quite a lot of extra versatility. You can breathe it; pump it into water to make the water hydrogen-antioxidant-rich; pump it into other solutions; use it while doing earwax irrigation; use it for a variety of foot-baths or other healing baths; etc. I'm finding you can do more with a hydrogen gas machine that you can't do with any of the other types of molecular hydrogen generators listed above. It is a very healing and soothing addition to my daily routine.

Hydrogen gas generators are the least portable, because of their size and weight, but they don't need to be hooked up to a water supply (only electric).

Here's a video of some recent testing and comparisons of hydrogen gas machines.